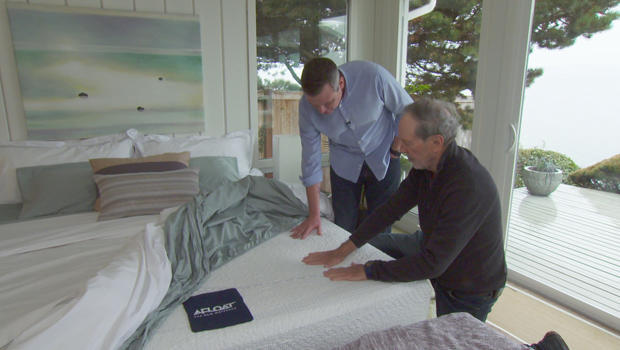 Charlie Hall loves the water. He lives right on it, in a beautiful home on Bainbridge Island, Washington. And as an inventor, over the years he's come up with all kinds of ways to utilize water, from camping showers to inflatable kayaks. But it was his very first water-related invention that changed America forever.

Fifty years ago this year, Charlie Hall invented the waterbed.

What are you supposed to feel lying on a water-filled mattress? "Well, feel the small of your back first of all. This mattress cradles you and fills the small of your back. Plus, you probably feel some very comfortable amount of warmth, and that helps your muscles expand and relax," Hall said.

He was around 22 years old when he started working on his idea. "You ever invite anyone back to the studio to test this thing out?" laughed Luke Burbank.

Way back in 1968, Hall was studying industrial design in San Francisco. His "groovy" idea for his senior thesis was something he called "the pleasure pit." "You could have friends over, lounge on it like a sofa and read the paper. And that was a lot of water – eight feet square."

Hall refined the idea, eventually patenting the water bed, which he started selling up and down the West Coast.

Burbank asked, "Did you know that it was an inherently sexy product?"

"Yes, I think so. Just watching people's reactions, they kinda got the sexy part of it. We delivered one to a nudist colony, and they called us up a couple weeks later and said, 'We gotta have another one. People love it!'"

To hear Hall tell it, it was the first substantial reimagining of a mattress in at least a hundred years.

"Beds long ago were, like, indentations in the floor of the cave," he said. "You put straw in there, you put leaves in there. And if you're a good hunter you put in a skin or a pelt. And then in the Middle Ages they moved up into something off the floor, wood rack frame around and ropes underneath tying it together. But that's the way the bedding business was until, like, 1800s. Coil springs came around, and that was a big innovation. Coil springs were big, until waterbeds came along."

"The mattress companies that we competed with, [like] Sealy and Simmons, those folks pretty much disregarded us to start with," said Keith Koenig, who started selling the beds in the 1970s with his brother at their store, Waterbed City, in South Florida. He says when people eventually fell for the beds, they fell hard.

"At one time we were the largest seller of beds in South Florida, and we just sold waterbeds," Koenig said.

In fact, by the 1980s more than one in five of all beds sold were waterbeds.

And the biggest fan of the water bed? That might be Katherine Johnson, of Mesa, Arizona. In the last 30 years, the longest she's been away from her waterbed is two weeks. "That's when I go back East to Pittsburgh, and I lay in bed with my granddaughters and we talk about the waterbed, and how we wish we were on the waterbed!" laughed Johnson.

Burbank asked Yvonne Doyen, "Would you say that it's one of the more notable things about your mom, is just how much she loves that waterbed?"

"It is. It is. Everybody knows it about her," Doyen said. "Everybody in the family also loves the waterbed. She slept on the waterbed with three other teenage girls, and two cats!" Doyen laughed.

Despite the Johnson family's enthusiasm, waterbed sales have tanked since their high-point in the '80s, and that's something Charlie Hall and his business partner Koenig hope to change, with their noticeably less "jiggly" version, called Afloat. [Oh, it looks like a normal bed, too!]

Burbank tried it out. "I've been fighting the urge this entire interview not to doze off, which I guess is kind of a rave review," he said.

Hall's new-and-improved mattress had its grand debut this year at Koenig's store, now called City Furniture, in Florida. And while it's still unclear if Americans are ready to fall back in love with the waterbed, for those considering it, Katherine Johnson has a message.

For someone who never been on a waterbed, what they're missing out on, beside a good night's sleep, is "just fun. It's almost like being a little kid again. I think there would be a lot happier couples, a whole lot less aches and pains. It's a religious experience!" 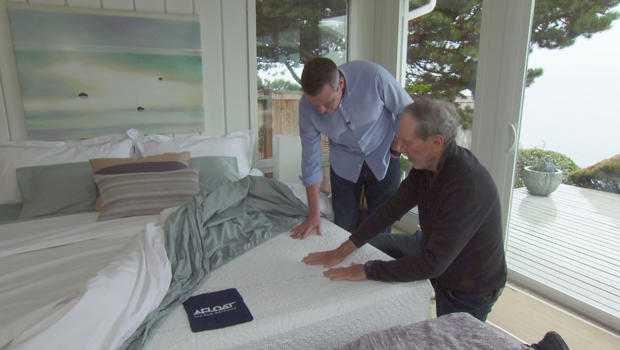 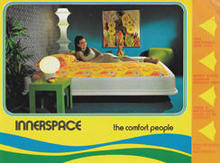 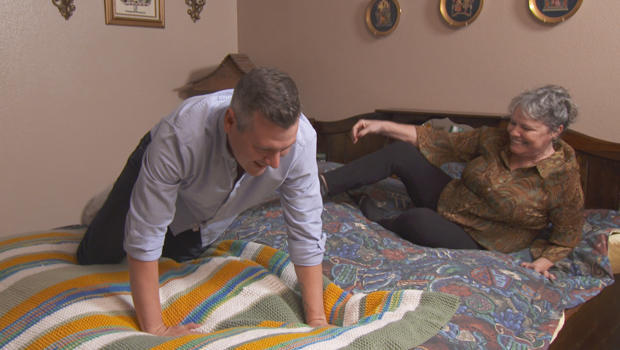 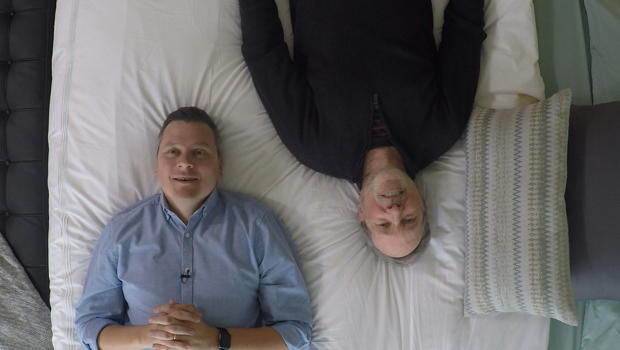