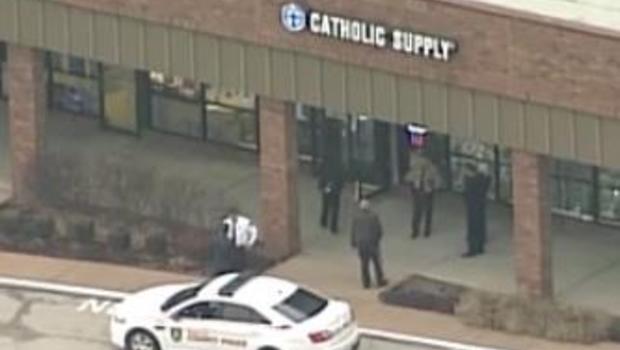 BALLWIN, Mo. — Police in suburban St. Louis were searching Monday for a gunman who walked into a religious supply store, sexually assaulted at least one woman and shot another woman in the head. Police said the shooting victim later died at a hospital.

The shooting happened about 3:15 p.m. at a Catholic Supply of St. Louis store in western St. Louis County, near the town of Ballwin. Police were looking for a man about 5-foot-7 with a heavy build, roughly 45 – 50 years old who they say should be considered armed and dangerous.

The gunman sexually assaulted at least one woman – police spokesman Shaun McGuire said he couldn't confirm media reports that more than one woman was assaulted.

It wasn't clear why the store was targeted and McGuire didn't know if its religious affiliation was a factor.

"Our hearts go out to the victims of this horrific tragedy at Catholic Supply," St. Louis Archbishop Robert Carlson said on Twitter.

Catholic Supply, which describes itself as "one of the largest Catholic retailers in the United States," also took to Twitter:

McGuire said the woman who died didn't know the suspect.

"Obviously, that adds to the intensity of our search," he said.

The shooting happened at a strip mall in an affluent area of suburban St. Louis along Manchester Road, one of the most congested roadways in the region. McGuire said the heavy volume of traffic only made finding the suspect more difficult.

"Obviously someone could blend in pretty easily," he said.

Catholic Supply of St. Louis Inc. operates three stores specializing in church supplies for parishes as well as Catholics. The company's website says it also publishes national supply catalogs. It's family-owned — it's not owned by the Archdiocese of St. Louis.

Ballwin is about 25 miles west of St. Louis. 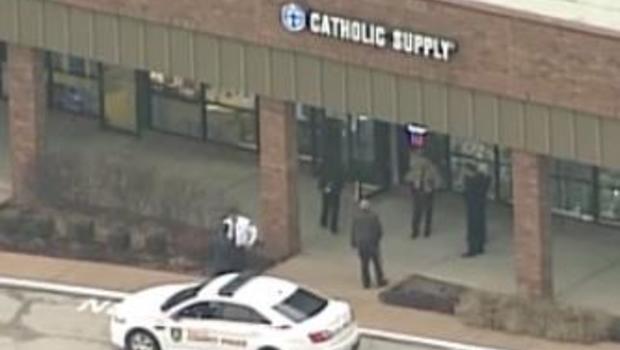