Stocks slumped Tuesday as the technology sector continued to lose ground and as bellwether retailer Target spooked investors by missing its earnings forecast.

The rout has erased all of the indexes' gains on the year, putting all three in the red.

The deepening losses among tech giants such as Apple and Facebook come amid fears of slowing sales growth and concern about government regulation. Apple reportedly cut production orders on its three newest iPhone models. The stock lost more than 7 percent of its value on Monday and Tuesday, bringing it close to a bear market.

She added, "Part of the problem is that investors no longer expect an average growth in profit. If the sales are not double digit and spectacular – as is the case in with the latest iPhone – the disappointment quickly translates into a selloff in shares."

Since Apple on August 2 became the first U.S. company worth $1 trillion, the tech giant's market value has fallen roughly $145 billion.

Concern over the increasingly testy relationship between the U.S. and China is also weighing on tech stocks, according to analysts at Capital Economics.

The tech sector is "amongst the most vulnerable to a further escalation of the U.S.-China trade war," they said in a note. "[W]e are sticking to our view that the equities of IT firms will be amongst the worst performers as stock markets around the world fall much further between now and the end of next year."

The company on Tuesday posted net income of $622 million, or $1.17 per share. Per-share earnings without one-time benefits and pretax gains were $1.09, 2 cents short of expectations, according to a survey by Zacks Investment Research.

Revenue for the Minneapolis retailer was $17.8 billion, just edging out Wall Street expectations.

Revenue at stores opened at least a year rose 5.3 percent, its sixth consecutive quarter in that direction. And online sales soared 49 percent. In the previous quarter, Target racked up the strongest same-store sales growth in 13 years.

"Operating profit is down by 3.3 percent over the prior year," noted Neil Saunders, managing director of GlobalData Retail, in a research note. "We believe that this modest decline reflects a number of pressures including higher staff wages, fulfillment expense, some investment costs, and a slight decline in gross margins."

He added, "While this is unfortunate, we see this decline as necessary to support Target's growth ambitions. Some on Wall Street may lament the dip, but the truth is you cannot reinvent a retailer on the cheap. Target is not doing that and we applaud them for it."

Presidents Donald Trump and Xi Jinping are due to meet this month at a gathering of the Group of 20 major economies. At the weekend meeting in Papua New Guinea, Trump's vice president, Mike Pence, criticized Beijing for intellectual property theft, forced technology transfers and unfair trading practices.

"The conviction for a bounce back into the year end for equity markets can be seen slowly diminishing as worries across a variety of issues entrench themselves," Jingyi Pan of IG said in a report. Pan said investors are shifting to safe havens amid uncertainty ahead of the G20 meeting. 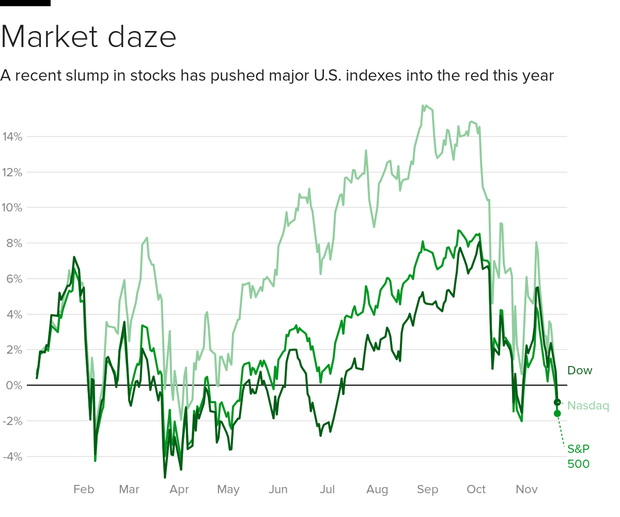