The first teaser for the CW's much-hyped DC crossover event is here. Fans can see Ruby Rose in action in her debut as Kate Kane/Batwoman in the three-show crossover between "Arrow," "The Flash" and "Supergirl."

In the teaser, Oliver says, "Batman is an urban legend," but later, Green Arrow, Oliver's alter ego, and Cisco see Batwoman (Rose) as she swoops down to make her entrance.

"That's not Batman," says Green Arrow, and Cisco responds, "No, it is not."

As shown in a previously released still, Rose wears a black and red bodysuit and cape with a red bat insignia on the chest. She also sports long red hair in the photo. Oscar-winning costume designer Colleen Atwood was behind the getup.

Rose's version of Batwoman will be different in that her iteration will be an out lesbian. Rose is slated star in her own "Batwoman" series, which could hit the CW in the 2019-2020 TV season. If the project makes it to series, Batwoman will be the first gay lead character in a live-action superhero TV show.

Producers Greg Berlanti, Sarah Schecter and showrunner Caroline Dries describe the character as complex: "Armed with a passion for social justice and a flair for speaking her mind, Kate Kane soars onto the streets of Gotham as Batwoman, an out lesbian and highly trained street fighter primed to snuff out the failing city's criminal resurgence. But don't call her a hero yet. In a city desperate for a savior, Kate must overcome her own demons before embracing the call to be Gotham's symbol of hope."

In August, Rose wrote online that she was happy her character would be open about her sexual orientation, saying, "The Bat is out of the bag and I am beyond thrilled and honored. I'm also an emotional wreck.. because this is a childhood dream. This is something I would have died to have seen on TV when I was a young member of the LGBT community who never felt represented on tv and felt alone and different."

But soon, Rose was slammed by trolls who said she was "not gay enough" because she has identified as gender-fluid, and that she was not Jewish (Kane is a Jewish character). Rose consequently left Twitter. 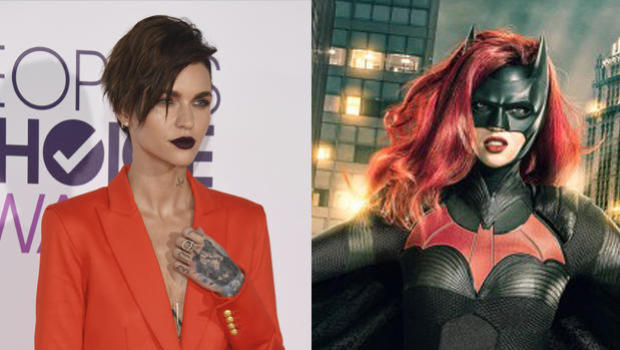