Stocks slumped Tuesday as the technology sector continued to lose ground and as bellwether retailer Target spooked investors by missing its earnings forecast.

The rout has erased all of the indexes' gains on the year, putting all three in the red.

The deepening losses among tech giants such as Apple and Facebook come amid fears of slowing sales growth and concern about government regulation.

Apple reportedly cut production orders on its three newest iPhone models. The stock lost more than 8 percent of its value on Monday and Tuesday, bringing it into a bear market. Since Apple on August 2 became the first U.S. company worth $1 trillion, the tech giant's market value has fallen roughly $146 billion.

She added, "Part of the problem is that investors no longer expect an average growth in profit. If the sales are not double digit and spectacular – as is the case in with the latest iPhone – the disappointment quickly translates into a selloff in shares."

Presidents Donald Trump and Xi Jinping are due to meet this month at a gathering of the Group of 20 major economies. At the weekend meeting in Papua New Guinea, Mr. Trump's vice president, Mike Pence, criticized Beijing for intellectual property theft, forced technology transfers and unfair trading practices.

The tech sector is "amongst the most vulnerable to a further escalation of the U.S.-China trade war," Capital Economics analysts said in a note. "[W]e are sticking to our view that the equities of IT firms will be amongst the worst performers as stock markets around the world fall much further between now and the end of next year."

Because China is a supplier for many U.S. electronics companies, policy changes or general unpleasantness could ding those companies' profitability.

"Anything that's hardware related is very dependent on global supply chains, and if we see further ratcheting up of trade tensions that would be vulnerable," said David Lefkowitz, senior equity strategist at UBS.

"We've actually been getting increasingly more bullish as stock prices have gone lower in this correction. Especially for long-term investors, these tend to be very good buying opportunities," he said.

— The Associated Press and Aimee Picchi contributed to this report. 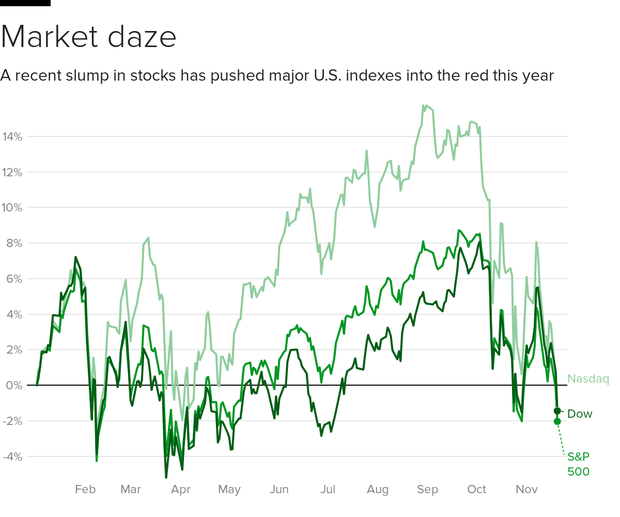 Trump to impose new tariffs on all Mexican goods over migrant...