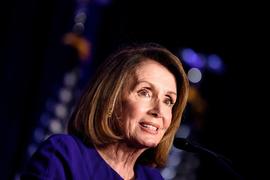 A bloc of 16 House Democrats officially released a letter Monday declaring they will not support Nancy Pelosi's second bid for speaker.

On Jan. 3, when the new Congress convenes, at least 218 votes — half of the House of Representatives — will be needed in order to become speaker. If all 16 members who signed the letter released on Monday follow through with their pledge to vote for someone else, this group hopes Pelosi's vote tally will be just shy of the necessary threshold.

The letter, first shown to CBS News last week, did not gain any additional support from incumbents or new members over the weekend. The following members and members-elect signed the letter:

McAdams trails Rep. Mia Love, R-Utah, in his bid to join Congress and CBS News has not yet declared McAdams the winner, so he may ultimately have to drop off the letter.

Notably missing from the letter is Rep. Marcia Fudge, D-Ohio, who has said she is toying with her own bid for speaker. It was not immediately clear why she did not sign the letter, despite having been on board with earlier drafts. Aides to Pelosi didn't immediately reply to requests for comment. Rep. Tim Ryan, D-Ohio, also left his name off a similar letter when he debated challenging Pelosi.

On Friday, Pelosi met with Fudge, who said the meeting had gone "very well," but "what she asked me was basically how we could get to a point where I could be supportive." Fudge said she would make her final decision about whether she'll challenge Pelosi soon after Thanksgiving. Pelosi confirmed through a spokesperson that she and Fudge "had a candid and respectful conversation."

Pelosi has also met with 32 of the newly elected members one-on-one, according to an aide.

For years Republicans have splashed tens of thousands of anti-Pelosi ads in an effort to stir up tension and connect their opponents to the former speaker.

However, this group of 16 is now hopeful a few of the returning and new representatives who won despite the anti-Pelosi messaging will jump into their crusade and vote for someone else on the floor besides her.

Under pressure by Republicans not to support Pelosi, Rep. Conor Lamb, D-Pennsylvania, ran ads declaring his opposition to her. Congresswoman-elect Mikie Sherrill, D-New Jersey, fervently argued with her opponent over how much she does not support Pelosi.

Congresswoman-elect Abigail Spanberger, D-Virginia, on Friday said she would not sign this letter but does not intend to support Pelosi, according to CNN.

"I've been very clear about my position and that remains the same," she said. "I will be voting but I will not be voting for her."

Other new members the group hopes to woo are Elissa Slotkin from Michigan, Jason Crow from Colorado, and Jared Golden from Maine.

Absent from the letter Monday was an official endorsement of a challenger to Pelosi for speaker.

On top of the dozens of high-profile Democratic groups who have thrown their support behind Pelosi, on Friday, 61 returning and new women representatives signed a letter of support applauding Pelosi's "battle-tested record."

"Now that we are faced with unprecedented threats to our democracy, women, minorities, and even the most basic American values by President Trump, we need your effective leadership more than ever to advance our efforts to help hard-working families get ahead," the letter read.

If no one challenges Pelosi, the top three leadership spots will go unopposed, since Rep. Diana DeGette on Monday stepped away from challenging Rep. Jim Clyburn for the third position.

Here is the full letter: 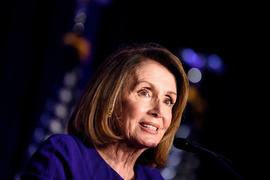