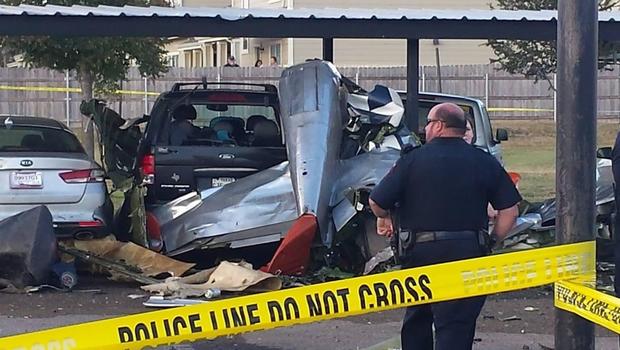 FREDERICKSBURG, Texas — A privately-owned vintage World War II Mustang fighter airplane that had participated in a flyover for a museum event crashed into the parking lot of a Texas apartment complex Saturday, killing the pilot and a passenger, authorities said. One of the victims was a veteran, the Pacific War Museum told CBS Austin affiliate KEYE.

Texas Department of Public Safety Sgt. Orlando Moreno confirmed the two people on board had died in the crash in Fredericksburg, about 70 miles north of San Antonio, but he did not identify them.

The aircraft was destroyed and several vehicles in the parking lot damaged, Federal Aviation Administration spokesman Lynn Lunsford said. Photos from the crash site showed pieces of the plane on top of parked vehicles. There were no immediate reports of injuries or deaths on the ground.

The P-51D Mustang fighter was returning after performing a flyover during a living history show at the National Museum of the Pacific War, museum director Rorie Cartier told The Associated Press in an email. Fredericksburg is home to the museum.

"We are extremely saddened by the unfortunate accident this afternoon that claimed the lives of two wonderful people. We express our deepest condolences to the families of both on board," Cartier said.

The Mustang was first built by North American Aviation in 1940 and was used by the U.S. military in World War II and the Korean War.

The National Transportation Safety Board and the FAA said they would investigate. 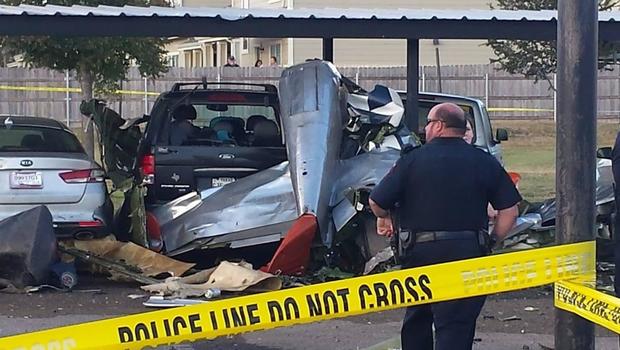 Pfizer says COVID-19 vaccine could be ready by late November

Cleveland Browns win for the first time since 2016

Pro bull rider, 25, dies after being injured during competition