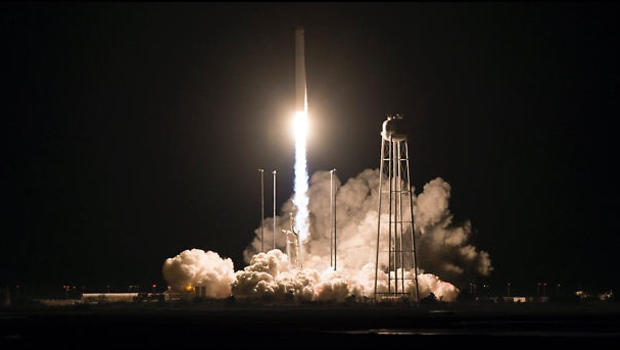 Less than a day after a Russian Progress cargo ship took off from Kazakhstan on a two-day flight to the International Space Station, Northrop Grumman fired off an Antares rocket from Virginia's eastern shore early Saturday. The rocket boosted a Cygnus supply craft into orbit with another 3.7 tons of equipment and supplies bound for the lab complex.

Arcing away to the southeast as it climbed directly into the plane of the space station's orbit, the Antares put on a spectacular light show, smoothly accelerating through a clear, deep overnight sky. Its fiery exhaust was visible for miles around.

The liquid-fueled first stage shut down and fell away three minutes and 40 seconds after liftoff, followed by ignition of the rocket's solid-fuel upper stage, which fired for a little more than two-and-a-half minutes to complete the climb to orbit.

The Cygnus spacecraft separated from the spent second stage two minutes later, kicking off a two-day rendezvous with the International Space Station. If all goes well, the spacecraft will carry out an automated approach to the lab complex, pulling up to within about 30 feet early Monday.

At that point, astronaut Serena Auñón-Chancellor, operating the station's robot arm, will lock onto a grapple fixture so the spacecraft can be pulled in for berthing at the lab's centra Unity module.

Among the experiment hardware is a commercial 3D printer called the "Refabricator" that can process waste materials into filament that can be used to print tools and other components; a "lab on a chip" cell culture device to study skeletal muscle cells; research to study how cement solidifies in weightlessness; and another to learn more about proteins involved in Parkinson's disease.

Over the next three months, the station crew will unload the cargo ship and repack it with trash and no-longer-needed equipment. After release from the station in mid-February, the spacecraft will launch three small Cubesats from a commercially-developed NanoRacks deployer before plunging back into the atmosphere and burning up.

Saturday's launch was the 10th operational resupply mission carried out by Northrup Grumman and the recently acquired Orbital ATK under an initial 11-flight contract with NASA that is expected to total $2.89 billion, according to the agency's inspector general. The company also holds a follow-on contract for at least six space station resupply missions at an as-yet-unspecified cost.

On Friday, Roscosmos, the Russian space agency, launched a Soyuz FG rocket from the Baikonur Cosmodrome in Kazakhstan, lifting the Progress MS-10/71P cargo ship into orbit. Loaded with 2.8 tons of propellant, crew supplies, water and equipment, the Progress is on track to dock at the Russian Zvezda module Sunday afternoon U.S. time.

The Progress launch was critical to Roscosmos and NASA because it demonstrated a successful recovery from an Oct. 10 launch abort when problems with the system used to jettison one of four strap-on boosters malfunctioned, forcing the two-man crew of a Soyuz ferry ship to carry out an emergency landing.

With the successful launch Friday, the Russians plan to press ahead with plans to launch another Soyuz spacecraft on Dec. 3 to deliver vehicle commander Oleg Kononenko, Canadian flight engineer David Saint-Jacques and NASA astronaut Anne McClain to the station, briefly boosting the lab's crew to six.

The day after the Soyuz launch, SpaceX plans to launch a Dragon cargo ship from Cape Canaveral carrying yet another load of supplies to the space station. Then on Dec. 20, Auñón-Chancellor, Expedition 57 commander Alexander Gerst and Soyuz MS-09/56S commander Sergey Prokopyev plan to return to Earth, closing out a 196-day mission.

Kononenko, Saint-Jacques and McClain will have the station to themselves until another set of crew members arrives in early April. 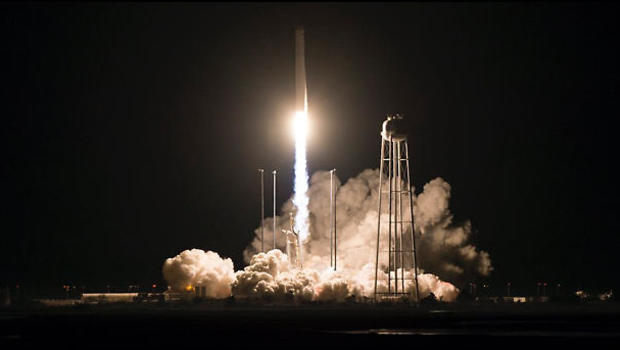