By Irina Ivanova MoneyWatch November 16, 2018, 6:08 PM Thanksgiving dinner costs are at their lowest in eight years

Roasted, brined, smoked or under a bed of bacon: however you prefer your Thanksgiving turkey, chances are you'll spend less on your holiday meal this year than any since the end of the Great Recession. Dropping prices have brought the cost of a Thanksgiving meal to an eight-year low, said the American Farm Bureau Federation.

This year, the average nationwide cost of a holiday meal for 10 people is $48.90, or less than $5 per person, according to the farm group's annual survey. That's a 22-cent decrease from last year's average. The bureau has been tracking the price of a basket of Thanksgiving groceries since 1989. Adjusting for inflation, this year's spread would have cost just $19.37 at that time.

A chunk of savings is due to turkey prices, which are at their lowest since 2014, according to the bureau. The cost is at $21.71 for a 16-pound bird, or roughly $1.36 per pound. Milk, fresh sweet potato, canned green peas and dinner-roll prices are also down.

One reason is an ample supply of turkeys, which has kept prices stable through the year, IHS Markit analysts said in a note. "While the typical seasonal pattern is for the price of turkey to increase as the year progresses, 2018 has been different. Consumers seem to have been losing their appetite for turkey compared to other meats, and the birds have not been flying off the shelves."

As for how to get the cheapest turkey: Buy frozen, said economist Jay Zagorsky, an adjunct associate professor at Boston University. The typical store earns about 30 cents per frozen bird, which is barely enough to cover the cost of transporting it to the store or keeping it frozen. (The store is betting, however, that people coming in to buy turkeys will load up on other, higher-margin items.)

It's a different story for fresh turkeys—which are also the birds people most like to serve, according to Zagorsky. The retail price of a fresh hen turkey is about $1.51 a pound, or $30.20 for a 20-pound bird.

What you pay can also depend on where you live, with the priciest turkeys sold in Hawaii and in the South Central states, from Louisiana to Colorado. Zagorsky suggests that's thanks to competition: There are fewer supermarkets in that part of the country, while the Southeast region–where turkeys are cheapest–has the highest number of retailers.

However you prefer to cook your turkey—or turkey parts—maybe leave turkey sausage off the list. Some 91,000 pounds of the stuff are currently subject to a recall. 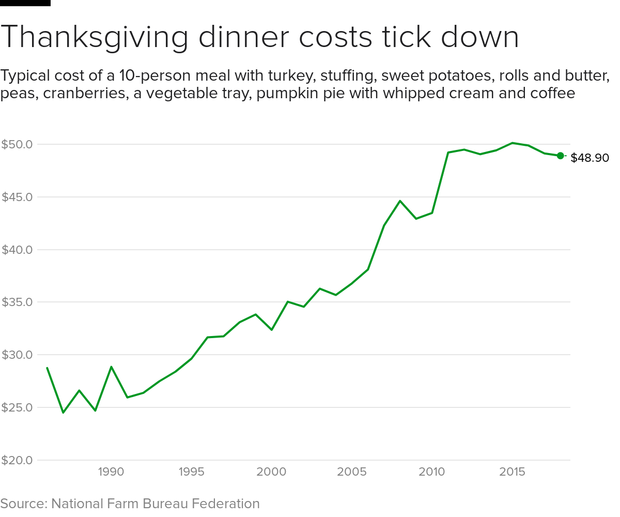 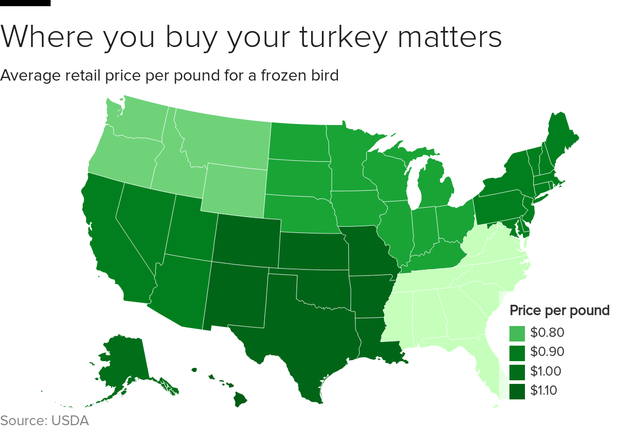