AP November 16, 2018, 9:12 AM Sen. Cindy Hyde-Smith speaks in video about making it "more difficult" for liberals to vote

Sen. Cindy Hyde-Smith is shown in a new video talking about "liberal folks" and making it "just a little more difficult" for them to vote. A campaign spokeswoman for Mississippi Republican criticized the video, saying the senator was joking.

The brief clip appeared on social media Thursday, days after another video showed Hyde-Smith praising someone at a different event by saying: "If he invited me to a public hanging, I'd be on the front row."

Both videos were posted on Facebook and Twitter by Lamar White Jr., publisher of The Bayou Brief, a liberal-leaning Louisiana news site. He said he received them from a trusted source, and that neither video was edited to change Hyde-Smith's words.

Hyde-Smith, who is white, faces Democrat Mike Espy, who is black, in a Nov. 27 runoff. The winner gets the final two years of a six-year term.

Republicans hold most statewide offices in Mississippi, and this is the state's hardest-fought U.S. Senate race in a generation.

Mississippi has a history of racially motivated lynchings. Civil rights activists were also beaten and killed in the state as they pushed for African-Americans' voting rights, particularly from the end of World War II until the 1960s.

"And then they remind me, that there's a lot of liberal folks in those other schools who that maybe we don't want to vote. Maybe we want to make it just a little more difficult. And I think that's a great idea," Hyde-Smith tells a small group.

Espy campaign spokesman Danny Blanton said: "For a state like Mississippi, where voting rights were obtained through sweat and blood, everyone should appreciate that this is not a laughing matter. Mississippians deserve a senator who represents our best qualities, not a walking stereotype who embarrasses our state."

Hyde-Smith, endorsed by President Donald Trump, is the first woman to represent Mississippi in either chamber of Congress. She has served since April, after Mississippi's governor appointed her to temporarily succeed longtime Republican Sen. Cochran, who retired.

A political ad on Facebook this week uses a 1930 photo of a white crowd in Indiana posing around a tree as the lifeless bodies of two black men hang above them, lynched in nooses. The ad superimposes an unrelated photo of Hyde-Smith as text appears: "This is where U.S. Senator Cindy Hyde-Smith would like to be."

The ad is paid for by PowerPACPlus, a California-based political action committee that has spent nearly $1.8 million in other advertising to support Espy.

A video that surfaced Sunday shows Hyde-Smith at a Nov. 2 campaign event in Tupelo making the "public hanging" comment. She said the phrase was "an exaggerated expression of regard" for the supporter and "any attempt to turn this into a negative connotation is ridiculous." At a news conference Monday, she would not answer reporters' repeated questions about the "hanging" comment.

Both Espy and the Hyde-Smith campaign condemned the ad.

"This is the same out-of-state group that is spending millions of dollars promoting Mike Espy and has now taken his campaign to the lowest depths imaginable," Scallan said. "It is time for Mike Espy to tell his group to end this appalling, divisive attack."

Espy said his campaign doesn't control what PowerPACPlus does, and he called the ad "not helpful."

"I can't make them pull it down because we didn't ask them to put it up," Espy said. "It's racially divisive. It's something that we didn't endorse, and we'd like them to pull it down."

Under federal campaign laws, super PACs are not allowed to coordinate with candidates.

The PowerPACPlus website says the group's mission is "to build the political power of America's multiracial majority."

Marvin Randolph, spokesman for PowerPACPlus, said the ad with the lynching image is the first in a series of online ads that will be supported by at least $25,000 in spending.

"We expect to reach over a million viewers online," Randolph said. "This ad will also appear on Instagram and Twitter."

Both national parties are putting money and effort into the special election. Hyde-Smith and Espy each received about 41 percent in a four-person field Nov. 6 to advance to the runoff.

Espy in 1986 became Mississippi's first black U.S. House member since Reconstruction. In 1993 and 1994, he was U.S. agriculture secretary. 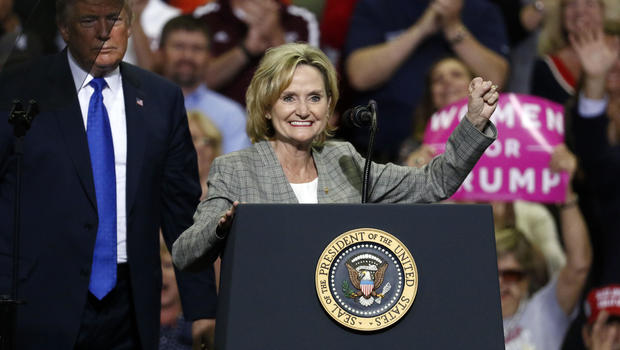