The reason: to harden its system against wildfires and deliver a sizable increase in profits to shareholders.

In an October filing with the Federal Energy Regulatory Commission, Pacific Gas & Electric Co. laid out a variety of dangers confronting its transmission lines running through Northern California, saying its system faced a higher risk of wildfires than any other utility.

"The implications of PG&E's exposure to potential liabilities associated with wildfires are dramatically magnified," the filing said. "Overcoming the negative financial impact of any significant damages that might ultimately be attributed to PG&E will require an ongoing commitment of capital from investors."

San Francisco-based PG&E — one of the country's largest electric utilities serving most of Northern and central California — made the request a month before the Camp Fire broke out Nov. 8 and quickly ballooned into the deadliest U.S. wildfire in a century. No cause has been determined, but speculation has centered on PG&E, which reported an outage around when and where the fire ignited.

Such speculation was anything but idle. California state investigators in June faulted PG&E-owned power lines for sparking a dozen blazes in Northern California in the fall of 2017 that killed 46 and incinerated nearly 9,000 homes and other structures.

On Thursday, authorities said the death toll from California's Camp Fire has risen to 63, bringing the statewide count to 66. In addition, more than 600 people have now been reported missing, according to the Butte County Sheriff's Office.

PG&E's potential liability for the deaths and massive property loss in the Camp Fire is slamming the company financially. Shares of the utility plunged as much as 32 percent on Thursday and are down nearly 63 percent since Nov. 8. The company's market value has declined by $15 billion.

The company's filing last month said it needed to boost revenue to keep investors from fleeing, noting that its credit rating was downgraded and its shares had plummeted since the 2017 fires.

"PG&E's electrical system is not immune from the impact of increases in the frequency and severity of extreme weather," Paulo said.

California Public Utilities Commission (CPUC) President Michael Picker sought to calm financial markets late Thursday with a statement noting "an essential component of providing safe electrical service is the financial wherewithal to carry out safety measures." But he added that he's expanding an investigation of PG&E's safety culture to look at the company's "corporate governance, structure and operation."

PG&E shares rebounded in after-hours trading, regaining Thursday's losses but remaining far below their value when the fire broke out.

Height Commentary analyst Clayton Allen wrote in a research note that the regulators' comments indicate they will be a "constructive influence," including a comment from a CPUC official that "the Commission does not want PG&E (PCG) to go into bankruptcy."

The company has $3.4 billion in cash and cash equivalents after drawing down all of its revolving credit facility, and it has an additional $1.4 billion in wildfire insurance coverage, according to a filing. In statement to CBS MoneyWatch, PG&E said it tapped its credit facility "to provide greater financial flexibility, including to pay down upcoming debt maturities and for general business purposes."

An analyst at Citi Investment Research estimated damages could exceed $15 billion. And the company's potential liability for last year's fires has been pegged at upward of $10 billion.

The company said in its rate-hike request that the extreme wildfire risk justified a higher profit than an average utility is allowed to earn. It cites a California legal standard holding utilities entirely liable for damage caused by their equipment regardless of whether the company was negligent.

A state law approved this year makes it easier for the company to raise rates to pay off lawsuits, but the company says it still faces high risk and got no relief for fires that started this year.

The precipitous drop in the stock price shows investors are taking into account not just the fires but also the risk of future wildfires for which the utility could be responsible, analysts said.

"It's going to be very difficult for PG&E to finance its needs in the short run, so we think at this point, regulators need to step in and give the market some reassurance," said Travis Miller, a strategist at Morningstar.

PG&E is asking for a 9.5 percent increase in transmission charges — the cost of high-voltage lines that move power across large distances. That amounts to about $1.50 more per month for the average residential customer, Paulo said.

Advocates for utility customers have balked at PG&E's contention that it needs to raise rates because of wildfires. They say its problems are the result of poor management decisions.

"We don't pay electric bills in order to keep bailing PG&E out from its own negligence and incompetence, and we can't afford it," said Mindy Spatt, communications director for The Utility Reform Network.

Some analysts believe PG&E will be able to survive financially as long as there isn't another major catastrophe. But wildfires are getting bigger, deadlier and more destructive as housing pushes into rural areas and drought and high temperatures tied to climate change become the norm.

"The business doesn't earn enough money to pay for that in any kind of regular way," said Michael Wara, director of the Climate and Energy Policy Program at Stanford University. "These have to be extreme, once-in-a-generation events."

PG&E's ability to raise capital will be constrained, so it will probably be forced to cut back on expenses such as replacing aging equipment, analysts said. California utilities also need to invest in the type of upgrades that will allow the state to meet its aggressive renewable energy and carbon reduction goals.

Fire investigators have blamed PG&E equipment for 12 of last year's wildfires, including two that killed 15 people combined. In eight of those fires, investigators said they found evidence of violations of state law and forwarded the findings to prosecutors.

The company is facing dozens of lawsuits from insurers and people who lost their homes in last year. And a lawsuit this week blames PG&E for the latest fire, accusing the company failing to effectively maintain power lines.

California regulators generally allow utilities to pass on the costs of those lawsuits to their customers, but only if the company can show it prudently managed its equipment. The new state law makes it easier for utilities to bill customers if they can show a fire got worse from things outside their control, like severe weather. But lawmakers didn't drop the standard that puts all the liability on the utility, which is unique to two states.

"Very large damage payments of the size faced by California utilities are very unusual in other states," said Hugh Wynne of Sector and Sovereign Research, an investment research firm. 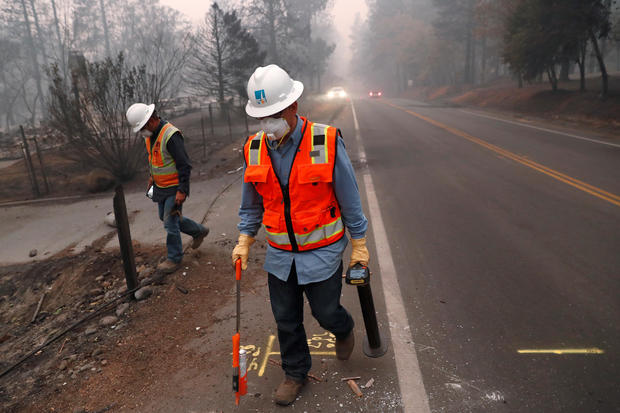