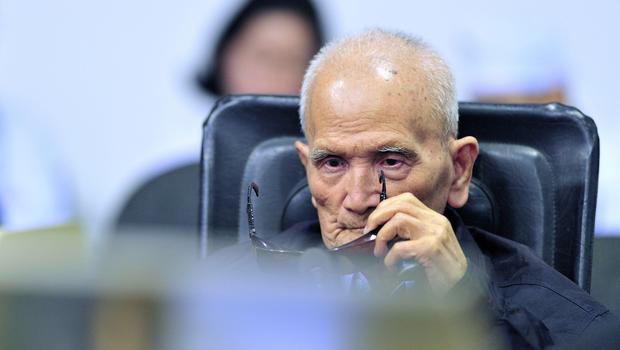 PHNOM PENH, Cambodia — The last surviving leaders of the Khmer Rouge regime that ruled Cambodia in the 1970s were convicted Friday by an international tribunal of genocide, crimes against humanity and war crimes. The regime's reign of terror was responsible for the deaths of an estimated 1.7 million people.

Nuon Chea and Khieu Samphan were top leaders in the regime, which forced residents out of the cities into the countryside where they labored under brutal conditions in giant agricultural cooperatives and work projects. The communist Khmer Rouge, under the leadership of the late Pol Pot, sought to eliminate all traces of what they saw as corrupt bourgeois life, destroying most religious, financial and social institutions.

Nuon Chea and Khieu Samphan were sentenced by the U.N.-assisted court to life in prison — the same punishment they are already serving after being convicted in a previous trial for crimes against humanity connected with forced transfers of people and mass disappearances. Cambodia has no death penalty.

Nuon Chea, 92, was considered the Khmer Rouge's main ideologist and Pol Pot's right-hand man, while Khieu Samphan, 87, served as the head of state, presenting a moderate veneer as the public face for the highly secretive group.

Dissent under Khmer Rouge rule was usually met with death, and even the group's loyalists faced torture and execution as the radical experiment at revolution failed, with blame cast about its ranks for alleged sabotage.

But executions counted for only a fraction of the death toll. Starvation, overwork and medical neglect took many more lives, amounting to as much as one-quarter to one-third of the entire population. Only when an invasion by Vietnam finally drove the Khmer Rouge from power in 1979 did the magnitude of Cambodia's holocaust become known.

Friday's verdict, read aloud by Judge Nil Nonn, established that the Khmer Rouge committed genocide against the Vietnamese and Cham minorities. Scholars had debated whether suppression of the Chams, a Muslim ethnic minority whose members had put up a small but futile resistance against the Khmer Rouge, amounted to genocide.

The tribunal, officially called the Extraordinary Chambers in the Courts of Cambodia, or ECCC, also ordered reparations for some of those judged to be victims.

Lawyers for Nuon Chea said they would appeal, and Khieu Samphan was expected to do the same. Both men have suggested they were targets of political persecution.

BBC News reports that a common frustration for victims is that lower-level Khmer Rouge members have never faced justice for their alleged crimes. Perpetrators and victims often live alongside each other.

Soy Sen, who says he was imprisoned and tortured, said of Friday's verdict: "It's not going to heal the deep wounds they inflicted upon us."

There are also fears that politics will thwart the tribunal from undertaking any further prosecutions. Cambodia's long-serving, autocratic Prime Minister Hun Sen has declared he will allow no further cases to go forward, saying they would cause instability. Hun Sen was a Khmer Rouge commander who defected when the group was in power and was installed in government after the Khmer Rouge were ousted by Vietnam's invasion.

Initial work had been done on two more cases involving four middle-ranking members of the Khmer Rouge, but they have been scuttled or bottled up by the tribunal, which is a hybrid court in which Cambodian prosecutors and judges are paired with international counterparts.

The failure to attain a broader sweep of justice has troubled some observers.

"Today's verdict hopefully brings some measure of justice to the victims, 40 years after the unspeakable mass atrocities committed by the Khmer Rouge in Cambodia," said Nicholas Bequelin, Amnesty International's regional director for East and Southeast Asia. "While this second trial of the Khmer Rouge's last surviving senior leaders results in two convictions, and 14 reparation projects, this is bitter justice: the world has waited far too long for this moment. Decades after the crimes and 13 years after it was established, the ECCC should have achieved much more."

Others, however, highlighted the tribunal's accomplishments.

"International tribunals are better than the alternative, impunity. They will always be political and fall short of expectations," Alexander Hinton, an anthropology professor at Rutgers University and author of two books about the tribunal, said ahead of Friday's verdicts. "But justice is usually delivered, even if at times, as has been the case with the ECCC, it staggers across the finish line." 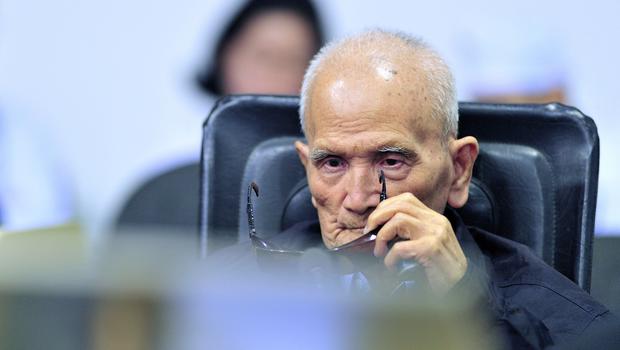 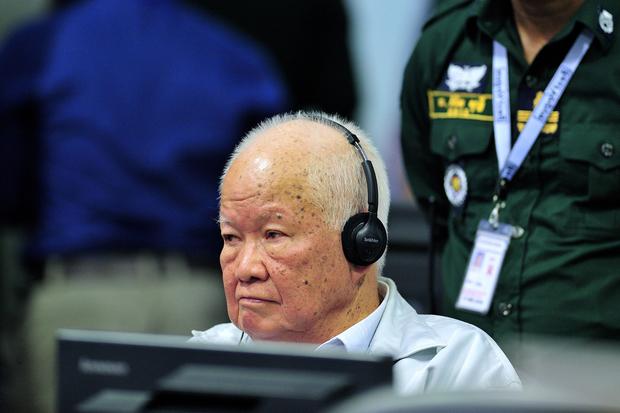