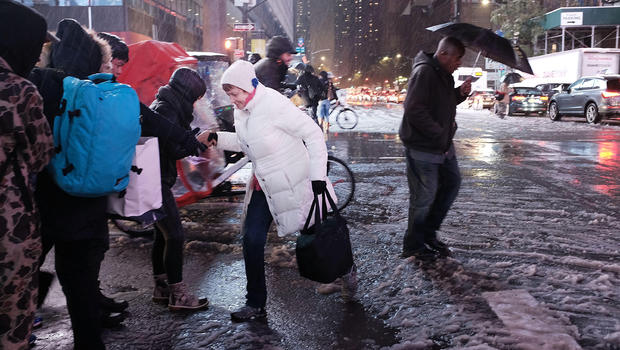 CBS News November 16, 2018, 7:10 AM Early taste of winter plunges the Northeast into chaos

Millions of people across the Northeast are waking up to dangerous travel conditions after a massive and deadly snow storm paralyzed the nation's largest metro region. The storm, which seemed to catch the Northeast completely off guard, spanned 16 states from Illinois to Massachusetts and is blamed for at least eight deaths. Nearly 200,000 utility customers in five states have no power Friday morning.

New York City saw the second heaviest snowfall totals on record for November. In the New York City area, where more than 20 million people live and work, local officials are being criticized after the intense storm nearly shut down the city during rush hour.

The snow caused a series of accidents on one of the world's busiest bridges turning a major artery connecting New Jersey and New York City into a parking lot and setting off a chain reaction of gridlock across the region. The storm arrived earlier and dropped more snow than what was expected, dumping between 3 to 6 inches right in the middle of rush hour. People started running out of gas and patience.

With no chains on their tires, buses stalled on roadways, forcing some people to walk. Port Authority bus terminal closed off the 2nd and 3rd floors because of overcrowding after so many buses were delayed or canceled.

Trains didn't fare much better. Platforms were packed as slow-moving trains backed up commuters for hours.

At Liberty Middle in West Orange, New Jersey, students were stranded overnight. They watched the movie "Frozen", naturally, and slept on gym mats.

In a tweet, New Jersey Gov. Phil Murphy said: "The storm was worse (than) originally forecasted. We will not stop working until our roads are clear."

In a radio interview, New York City Mayor Bill de Blasio said the storm's timing and intensity, along with the bridge traffic, affected the city's response.

"Now the plows were out, they had their salt, that wasn't the problem here. We had a bit, if you'll forgive the phrase, of a perfect storm," de Blasio said.

Port Authority offered free train rides into New Jersey for the rest of the night to try and make up for the delays. New Jersey State Police said it responded to 555 auto crashes and more than 1,000 calls for motorist assistance in less than 24 hours. 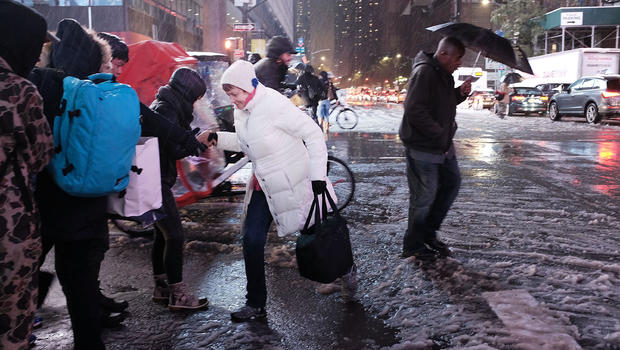