Michael Avenatti, the attorney for Stormy Daniels and a prominent Trump critic, has been arrested for domestic violence, according to a law enforcement source. The source told CBS News Avenatti is in custody but has not yet been charged.

TMZ first reported Avenatti's arrest for allegedly hitting his estranged wife, from whom he filed for divorce in 2017. Citing law enforcement sources, TMZ also said in its report that Avenatti screamed repeatedly, "She hit me first," and added, "This is bulls***."

However, in a statement through her lawyer, Lisa Storie-Avenatti denied the TMZ account. "This article is not true as it pertains to my client. Ms. Storie-Avenatti was not subject to any such incident on Tuesday night. Further, she was not at Mr. Avenatti's apartment on the date that this alleged incident occurred. My client states that there has never been domestic violence in her relationship with Michael and that she has never known Michael to be physically violent toward anyone," Valerie Prescott, Storie-Avenatti's lawyer, said.

Avenatti has become a fixture on cable news and is exploring a bid for president in 2020. He rose to fame as the attorney for Daniels, who was allegedly paid off to keep quiet about an affair with President Trump.

Avenatti is also the lawyer for Julie Swetnick, who accused Supreme Court Justice Brett Kavanaugh of sexual misconduct that took place decades ago. Avenatti was blamed by some Democrats for Kavanaugh's confirmation to the Senate when Swetnick walked back some of her accusations.

Avenatti has been referred to the FBI for an investigation into his and Swetnick's claims. 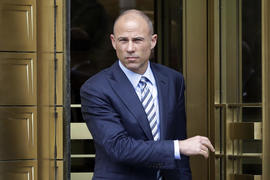 House majority whip says Biden “ought to modify his behavior”