Migos dressed up James Corden on Tuesday's "Carpool Karaoke" on the "Late Show." Offset, Takeoff and Quavo joined the late night host for a ride and sang along to classics like Whitney Houston's "I Wanna Dance with Somebody" and Neil Diamond's "Sweet Caroline," as well as hits by the hip-hop group.

The foursome opened the segment with "Walk It Talk It" before they talked about originating the "dab" dance move.

"Dabbin' is really swaggin', dabbin' is like look at my dab, look at my swag," explained Quavo.

"I feel slightly responsible … where I feel like I might have ruined it," confessed Corden. "I apologize for the destruction of the dab."

They also belted out "Bad and Boujee," "Motorsport" and "Walk It Talk It" together. Offset even performed his wife Cardi B's lines from "Motorsport."

Offset asked Corden a personal question: "Have you ever made love to 'Bad and Boujee'?"

Corden responded, "I'm going to be honest, no. Am I going to tonight? Yes."

Offset joked, "You better watch out, you might end up with 10 kids." The rapper and Cardi B welcomed a baby girl in July.

But Corden said, "Normally me and my wife just have the 'Les Miserables' soundtrack, so it will be nice to have something different."

Later, the trio took Corden for a makeover, and put the host into an oversized silver jacket and sunglasses similar to Quavo's.

"I don't look like Migos. I look like I'm hiding Migos under a coat," said Corden. "I feel like a recently divorced dad who's going through a breakdown."

Quavo told him he could pull it off with the right attitude, and Corden responded, "You're right, the clothes aren't the problem, I am." 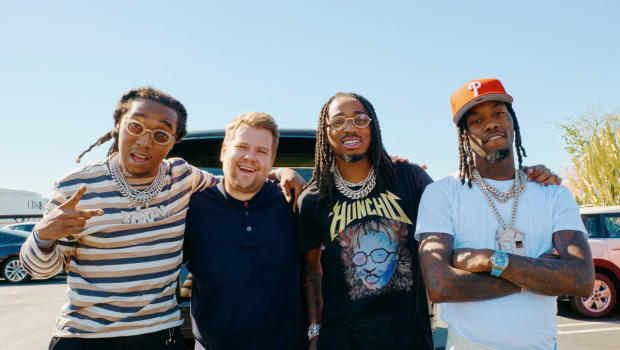