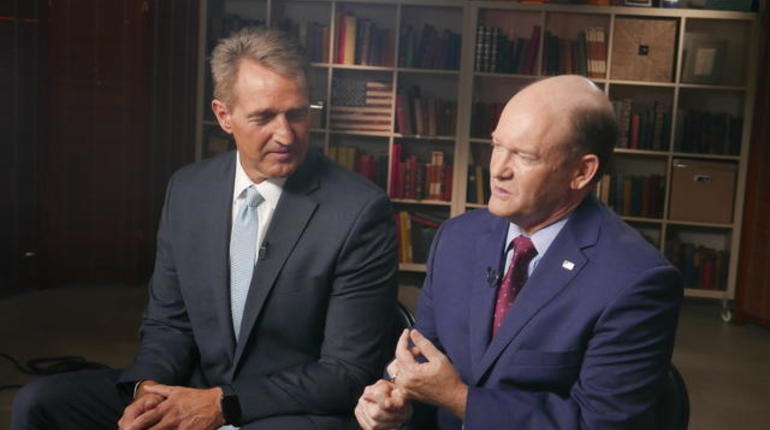 Sen. Jeff Flake said on Wednesday that he will not vote to advance any judicial nominees pending in the Judiciary Committee, or vote to confirm any of the judicial nominees awaiting a vote on the Senate floor, until Senate Majority Leader Mitch McConnell brings forward a bill to protect Special Counsel Robert Mueller from being fired by President Trump.

"I have informed the Majority Leader that I will not vote to advance any of the 21 judicial nominees pending in the Judiciary Committee, or vote to confirm the 32 judges awaiting a confirmation vote on the floor, until S. 2644 is brought to the full Senate for a vote," Flake said.

McConnell told CBS News' Nancy Cordes that he did not see any indication the legislation needed to be brought up, so he "doesn't think any legislation's necessary."

The bill passed the Judiciary Committee in April as compromise legislation sponsored by Republicans Flake and Sen. Thom Tillis, and Democratic Sens. Chris Coons and Cory Booker. Flake and Coons unsuccessfully tried to bring the bill to a Senate floor vote on Wednesday. McConnell objected to the request for a vote.

As one of the 11 Republican members of the 21-member Judiciary Committee, Flake has the power to block the 21 judicial nominees pending from advancing to a vote on the Senate floor. Flake may not have as much influence regarding the confirmation of 32 judicial nominees currently awaiting a vote on the Senate floor. As Republicans currently have a narrow 51-49 advantage, a judge can still be confirmed even if one Republican senator defects.

McConnell has said that his most important role during the Trump administration has been in confirming judicial nominees, including two Supreme Court justices. Flake, who is retiring at the end of the year, is threatening to impede that process.