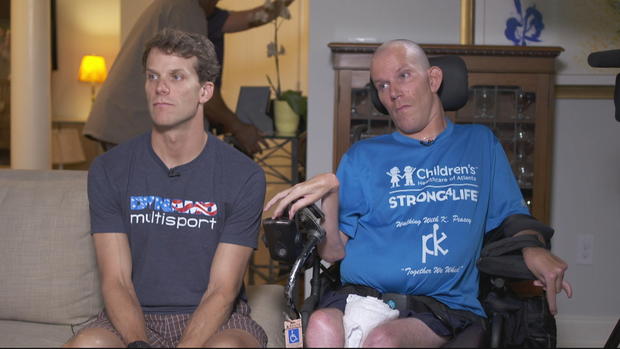 ATLANTA — In every way, Brent and Kyle Pease's brotherly bond has gone the distance. They race as a team in Ironman competitions, those grueling swim, bike and run competitions that cover 140.6 miles.

Kyle has cerebral palsy and has no use of his arms or legs.

"From the earliest age I wanted Kyle to be included in whatever we did and so it was like, 'OK, well, let's just figure this out,'" said Brent Pease.

Kyle said his brother is always looking out for him, even if it feels like it's too much.

Kyle got the idea while watching Brent race in his first Ironman in 2010. They found the right equipment, started training and made it happen for Kyle, just like when they were kids.

"Kyle uses my legs and I use his spirit," Brent said. "I pull Kyle in a boat and I push the pedals on a bike and I push him on the run. But that whole time Kyle has spastic quadriplegia so his body is fighting itself."

Their first Ironman took place in Madison, Wisconsin, in 2013. It took them 15 hours to finish.

"The most competitive athlete in our house is Kyle because he's been competing to be like everybody else his whole life," Brent said.

Last month in Hawaii, the Pease brothers competed in their fourth Ironman race in Hilo, the sport's ultimate race. They finished after almost 14 and a half hours, more than six hours behind the men's winner. But as always, brothers first.

To learn about the Kyle Pease Foundation, head to their website. 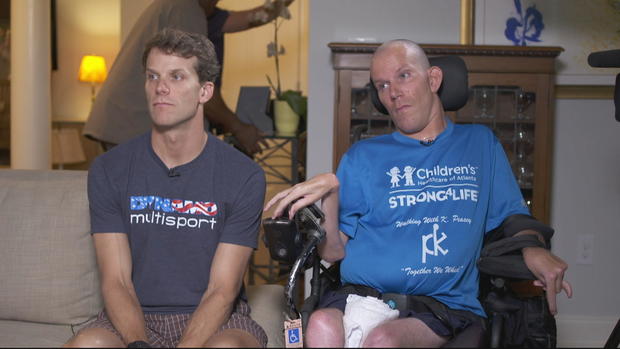