Having spent a fortune to help elect Democrats this fall, former New York City Mayor Michael Bloomberg declared his lifetime allegiance to the Democratic Party on Tuesday and outlined an aggressive timeline for deciding whether to run for president. Bloomberg registered as a Democrat in October.

"I think January, February would be about as late as you can do it and as early as you can gather enough information," Bloomberg told The Associated Press in an interview.

The 76-year-old billionaire said his decision would have little to do with other Democratic presidential prospects. He conceded that "it's much too early to tell" whether he has a legitimate chance of winning the Democratic presidential nomination in 2020 and, with it, the chance to take on another New York billionaire, President Donald Trump. Bloomberg's net worth is currently estimated to be $46 billion, according to Forbes, considerably higher than the president's, at about $3 billion.

"Thanksgiving, Christmas and then maybe a few weeks into January — that's when you really gotta sit down, talk to your advisers and say, 'Look, do I have a chance?' I think I know why I would want to run. I think I know what I think this country should do and what I would do. But I just don't know whether it's possible," Bloomberg told the AP.

He added, "If people don't seem to be warming to you, there's plenty of other ways that I can make a difference in life and say thank you to this country for what it's given my kids and me."

Should he run, Bloomberg would bring virtually limitless resources and a pragmatic governing approach to what is expected to be a massive 2020 Democratic field. Hardly a far-left liberal, he is described by his team as socially progressive and business-minded. He has spent tens of millions of dollars to promote liberal priorities on climate change, gun control and immigration.

It's unclear, however, whether there's room for Bloomberg in today's Democratic Party. There are over a dozen Democrats considering a run for president, as well as two who have already declared. The former mayor is likely to face stiff competition if he decides to run, particularly from candidates who have a stronger record of progressive legislation.

Tom Perez, chairman of the Democratic National Committee, offered a lukewarm assessment this week when asked about Bloomberg's $110 million investment in his party's 2018 midterm efforts.

"I applaud everybody who was involved," Perez said in an interview. "Very appreciative of Mayor Bloomberg. Equally appreciative of those grassroots activists who were knocking on doors every weekend, texting people, investing 50 bucks in the Democratic Party."

Still, Bloomberg endeared himself to many Democratic leaders in recent months after deciding to invest more than $110 million in the 2018 midterms — largely focused on House races. Long an active political donor to candidates in both parties, Bloomberg gave almost exclusively to Democrats this year for the first time. In the final weeks of before the election, Bloomberg's PAC sent out a nationwide ad urging voters to support Democrats.

The decision, he explained, was born out of his concern that Republicans who controlled the House and Senate weren't providing an adequate check on the Trump presidency. Yet this political season marked a permanent shift in his political identity, he said.

"I will be a Democrat for the rest of my life," Bloomberg said.

Initially registered as a Democrat, the Massachusetts native filed paperwork to change his voter registration to Republican in 2000 before his first run for New York City mayor, according to a spokesman. He was elected mayor as a Republican. In June 2007, he un-enrolled from the GOP, having no formal party affiliation until he registered again as a Democrat this October.

Months before that, Bloomberg directed his political team to work hand in hand with leading Democratic allies to shape the first nationwide election of Trump's presidency. His top aides even shared office space at times in the campaign's final days with the super PAC aligned with top House Democrat Nancy Pelosi.

Once it became clear Democrats seized the House majority, he said he delivered a stern message to Pelosi.

That's a message Pelosi herself has articulated in recent weeks. Bloomberg reinforced it again in person on Tuesday as Pelosi met with his board of directors in private.

"I said, sitting next to her, without mincing words, I said, 'You know, we expect you to do a good job,'" Bloomberg said. "That's why we supported the Democrats."

Guy Cecil, chairman of the Democratic super PAC Priorities USA, described Bloomberg's midterm effort as "incredibly helpful." It's unclear, however, whether Democratic voters who might favor younger, more liberal candidates in 2020 will see him any differently.

"Democrats appreciate how much he has invested and how much his team has been engaged in the cycle, but ultimately it's going to be about what Bloomberg's vision is for the future," Cecil said.

Bloomberg acknowledged he has already formulated his justification for a presidential bid, but he declined to share it when asked. Still, he offered a message to any critics who might not think he belongs in today's Democratic Party.

"I don't think anybody has done more on the environment, on gun safety, on immigration, go right down the list," Bloomberg said. "I was the one who stood up for gay marriage long before it became popular. I was the one at the national convention who said Trump was a con man. If you find anybody that's done more on these issues than I have, and the people that I've been lucky enough to work with, please give me a call. I'd like to hire 'em."

Bloomberg also considered an independent presidential bid in 2016 but concluded that he couldn't win enough electoral votes, and worse, "There is a good chance that my candidacy could lead to the election of Donald Trump or Senator Ted Cruz. That is not a risk I can take in good conscience," he said in March 2016. "I love our country too much to play a role in electing a candidate who would weaken our unity and darken our future — and so I will not enter the race for president of the United States." 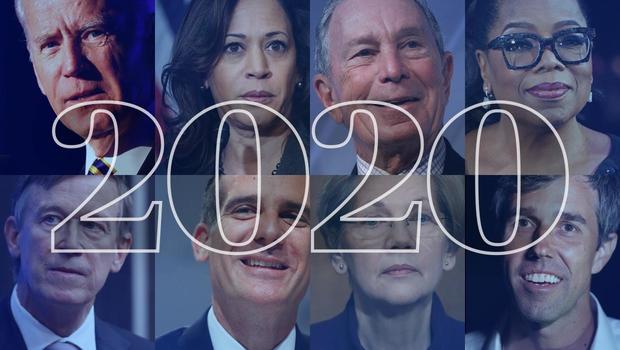 Obama to hit the campaign trail for Biden-Harris

Dems clash over anti-Semitism resolution in response to Omar comments