Just days after reports that the Food and Drug Administration is planning to propose further restrictions on the sale of e-cigarettes, the maker of Juul announced Tuesday it is taking steps to curtail the use of its flavored products by teens.

Juul Labs announced it will stop selling its flavored pods at more than 90,000 retail stores nationwide, including convenience stores and specialty vape shops. The company is also shutting down its social media accounts, which are popular with young people.

In a statement, Juul CEO Kevin Burns said the company and the FDA "share a common goal – preventing youth from initiating on nicotine."

"We don't want anyone who doesn't smoke, or already use nicotine, to use Juul products. We certainly don't want youth using the product," he said. "It is bad for public health, and it is bad for our mission."

Mango, fruit, creme, cucumber and other flavors will still be available for sale online at the company's website, though Juul says it will include additional age-verification measures and third-party verification to block sales to anyone under the age of 21.

The FDA is expected to announce a proposal this week to ban the sale of most flavored e-cigarettes at retail stores and gas stations across the country. 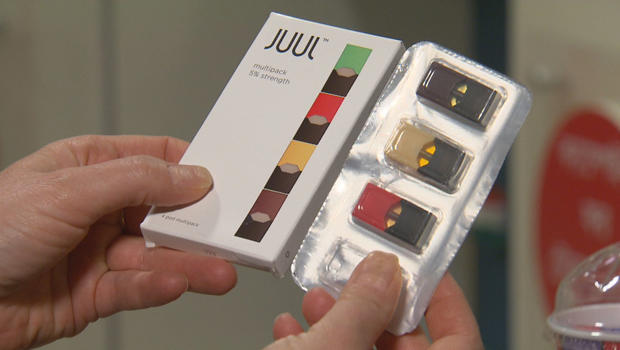