Some retailers have a holiday message for consumers: Buy now, or else face higher prices in January, when bigger tariffs on Chinese goods kick in.

President Donald Trump imposed tariffs of 10 percent on $200 billion in imported Chinese goods on Sept. 24. While some retailers are absorbing the cost of the September tariffs, consumers are likely to feel a bigger pinch in 2019. That's because the levy, which is paid for by American companies importing goods from China, will jump to 25 percent at year start.

The tariffs target a wide range of Chinese-made goods, from televisions to backpacks, according to a list released earlier this year by the U.S. Trade Representative. In recent weeks, companies have tempered profit forecasts as they rush to cut future costs by importing more goods from China now.

"Everybody's trying to bring in more goods before the holidays before the prices go up," said Rick Helfenbein, CEO of the American Apparel and Footwear Association, which represents more than 1,000 brands. "We encourage everybody who will listen, you know, if you're going to buy one sweater this Christmas, buy two."

One tech company, Swivl, is actively alerting its video equipment customers that its prices are likely to rise in January because of the tariffs: "We will absorb the additional costs in order to keep our current prices until January 1st, 2019," founder Vlad Tetelbaum wrote in a blog post. "At that time, our prices will increase. So make sure that all your purchases are completed as soon as possible before we are forced to [do] this."

Swivl, which makes video equipment and software for schools, manufactures in China and said moving those operations to another country would be even more expensive than paying the tariffs.

Cargo containers are stacking up

Leaders at midsize companies — those with $10 million to $1 billion in revenue — overwhelmingly say tariffs pose a threat to their business, according to a recent survey by the National Center for the Middle Market at Ohio State University. Hence, a strategically timed rush to lock in prices before the higher tariffs kick ins.

"Imports have usually dropped off significantly by this time of year but we're still seeing numbers that could have set records in the past," Jonathan Gold, the vice president overseeing supply chain and customs policy for the National Retail Federation, said in a statement. "Part of this is driven by consumer demand in the strong economy, but retailers also know that tariffs on the latest round of goods are set to more than double in just a few weeks. If there are shipments that can be moved up, it makes sense to do that before the price goes up."

The number of cargo containers known as twenty-foot equivalent units, or TFUs, were up 4.6 percent to 1.87 million in October from the previous year, according to ports monitored by the NRF and Hackett Associates in a monthly survey. They're down 1.3 percent from a previous peak in August, just ahead of the September tariffs. A TFU is one 20-foot-long cargo container or its equivalent.

Some companies are relying on strategies they've turned to when costs have spiked. Take Carter's, the baby clothing manufacturer. Richard Westenberger, Carter's CFO, likened the looming 25 percent tariff to a spike in cotton prices that prompted the company to raise prices in 2011 amid a cotton shortage.

"During the cotton crisis we improved our pricing about — by about 50 cents a unit," Westenberger said, according to a transcript of the company's recent earnings call. That year, Carter's had good sales growth "and did a good job recovering from that spike in cotton prices. So I think we have a handle on what's possible with the price increases."

American companies paid $4.4 billion in tariffs in September, a 54 percent increase compared with 2017 according to the group of industry associations put together to protest tariffs over the summer, called Tariffs Hurt the Heartland. That figure is projected to rise next year.

"President Trump's trade war with China and the threat of even higher tariffs in 2019 have created a mini-boom in imports and businesses have rushed to bring goods into the country ahead of the tariffs," Ben Hackett, the founder of Hackett Associates, said in the National Retail Federation statement. "We are clearly in a politically motivated trade environment."

Luckily for many retailers, they are looking at the strongest growth in holiday sales since 2011, thanks to healthy consumer confidence, low unemployment and growing wages. Holiday sales are forecast to climb 5.8 percent to more than $1 trillion, the first time holiday sales have passed the trillion-dollar threshold, according to figures from industry watcher eMarketer. 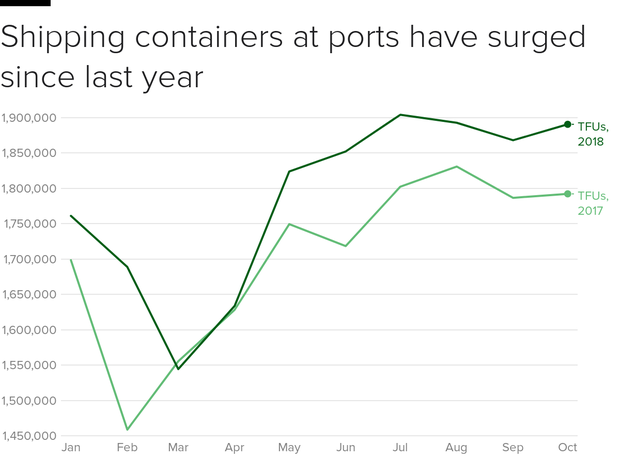 Half of America hasn’t recovered from the recession