It was announced Monday that Michelle Obama's new memoir, "Becoming" (published by Crown), is the latest selection of the Oprah Book Club. It's the 80th book to receive the coveted "Oprah seal of approval."

"I got an advance copy of what everybody is calling 'the book of the season,'" said Winfrey, "and I loved it so much, I've already read it twice.

"It's a tour de force. I laughed and I cried. It is exquisitely written. It is so vulnerable, so vivid. I want the whole world to read this book, and if you're in a book club, I encourage you to choose this book for your club, and let's all read it together.

"It's Michelle Obama's personal story but I know it will spark you to think about your own becoming."

The book goes on sale Tuesday.

In a preview of her interview with Obama (to be broadcast in a primetime special on the OWN network on Thursday, November 15), Winfrey asked the former first lady about her remarks in the book about then-"Apprentice" host Donald Trump's provocative "birther" comments, suggesting that President Barack Obama, running for reelection, was not really an American citizen.

"Donald Trump, with his loud and reckless innuendos, was putting my family's safety at risk. And for this I'd never forgive him," Michelle Obama wrote.

"Why was it important for you to say that at this time?" Winfrey asked.

"Because I don't think he knew what he was doing," Obama said. "That for him, it was a game.

"And for the Commander in Chief, which he now is, the threats and security risks that you face as the Commander in Chief, not even within your home country but around the world, are real. And your children are at risk. And the difference when you're now in that position [is], you understand that while you live in a bubble, your children have to live outside of the bubble. And in order for my children to have a normal life, even though they had security, they were in the world in a way that we weren't."

Michelle Obama will also be interviewed by Gayle King on "CBS This Morning" on Wednesday, November 15. 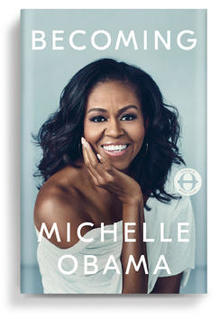