PARIS — President Trump paid tribute Sunday to U.S. and allied soldiers killed in World War I as he and dozens of other world leaders commemorated the 100th anniversary of the end of "a horrible, horrible war" that marked America's emergence as a world power.

"We are gathered together at this hallowed resting place to pay tribute to the brave Americans who gave their last breath in that mighty struggle," Mr. Trump said at the Suresnes American Cemetery and Memorial in the suburbs of Paris, where more than 1,500 Americans who died in the war are buried.

"It is our duty to preserve the civilization they defended and to protect the peace they so nobly gave their lives to secure one century ago," he said.

The Veterans Day speech came a day after Mr. Trump was criticized for failing to visit a different American cemetery about 60 miles outside of Paris Saturday because rain grounded the helicopter he had planned to take. A handful of senior administration officials, including White House Chief of Staff John Kelly, went in the president's place.

The speech was the final stop of the president's brief trip to Paris to commemorate the anniversary. Earlier in the day, he joined more than five dozen leaders gathered on a rainy day at the Tomb of the Unknown Soldier at the base of the Arc de Triomphe a century after guns fell silent in a global war that killed millions. Bells tolled across Europe's Western Front and fighter jets passed overhead to mark the exact moment the devastating war came to a close.

But Mr. Trump, a leader who has proudly declared himself a "nationalist" and advocated an "America First" approach, stood out at a memorial ceremony that focused on international cooperation.

The president and first lady Melania Trump traveled separately from most of the other presidents and dignitaries, who had gathered earlier at the Elysee Palace and traveled to the ceremony by bus. And Trump was not present as the other leaders arrived, walking side-by-side in a somber, rain-soaked line holding black umbrellas as bells finished tolling. They had arrived a few minutes late, missing the exact moment — 11 a.m. on Nov. 11, 1918 — that four years of fighting ended.

White House press secretary Sarah Huckabee Sanders cited security protocols for the presidential motorcade's solo trip down the grand Champs-Élysées, which was closed to traffic. But at least one topless woman breached tight security, running into the street and shouting "fake peace maker" as the cars passed. She had slogans, included the words "Fake" and "Peace," written on her chest.

The ceremony included a speech by French President Emmanuel Macron aimed directly at the rising tide of populism in the United States and Europe.

With Mr. Trump and other leaders looking on, Macron warned against the dangers of nationalism and said the "ancient demons" that caused World War I and millions of deaths are growing stronger.

"Patriotism is the exact opposite of nationalism: Nationalism is a betrayal of patriotism," he said, adding that, when nations put their interests first and decide "who cares about the others" they "erase the most precious thing a nation can have … Its moral values."

Mr. Trump has repeatedly branded himself a "nationalist," despite criticism from some that the term has negative connotations. At a news conference last week, Mr. Trump defended his use of the phrase. "You know what the word is? I love our country," he said, adding: "You have nationalists. You have globalists. I also love the world and I don't mind helping the world, but we have to straighten out our country first. We have a lot of problems."

Sitting several seats away was Russian President Vladimir Putin, who arrived at the ceremony separately as well. Putin shook Mr. Trump's hand, flashed him a thumbs-up sign and patted Mr. Trump's arm as he arrived, and Mr. Trump offered a wide smile.

Mr. Trump's eagerness to get along with the Russian leader — in spite of Russia's meddling in the 2016 election and numerous other aggressive moves — has alarmed America's European allies, who view Russia as a growing threat.

National Security Adviser John Bolton had said at one point that Mr. Trump would meet with Putin during the visit. But Mr. Trump later said he would instead sit down with him formally later this month at a world leaders' summit in Buenos Aires.

The two both attended a lunch Macron hosted for world leaders following Sunday's ceremony. But Putin was quoted by the state-funded Russian broadcaster RT saying they didn't end up meeting because they didn't want to "interrupt the schedule."

France was the epicenter of World War I, the first global conflict. Its role as host of the main international commemoration highlighted the point that the world mustn't stumble into war again, as it did so quickly and catastrophically with World War II. 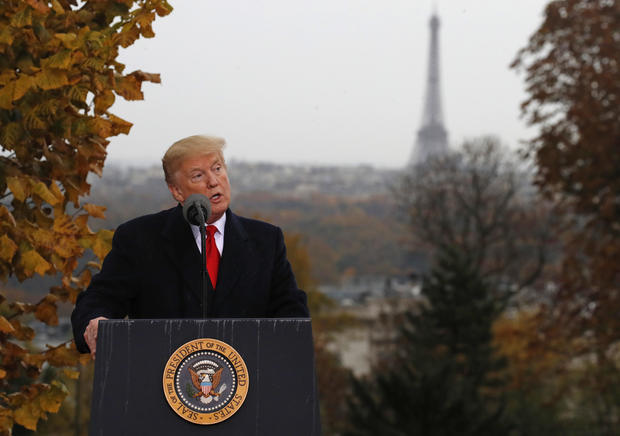 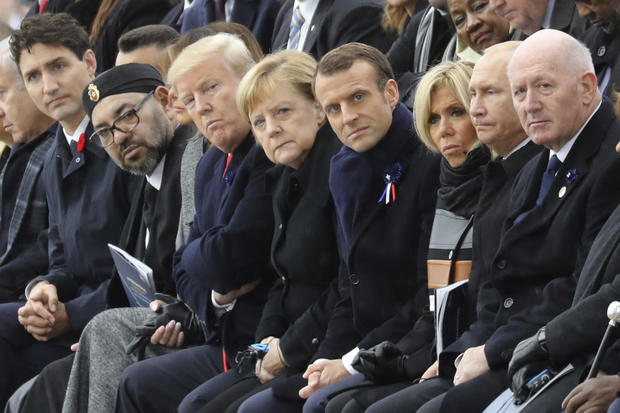