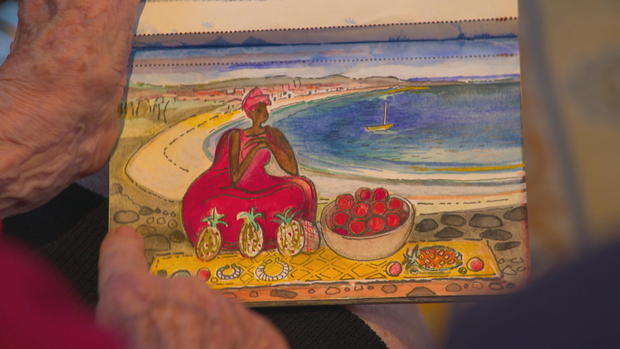 French artist Francoise Gilot has made a name for herself with her paintings, but it's two other names that have given her special notoriety. She was a longtime companion of Pablo Picasso and later, she was the wife of renowned scientist Dr. Jonas Salk. As a couple, they traveled all over the world, and now three of her sketchbooks from those trips have been published in a book by Taschen.
Gilot still has her sketchbook from her trip to Venice in 1974. She'd make observations, like that gondolas look like scorpions, and record her impressions of the city.
She'd been to Venice with her parents as a child. She was 53 when she made the trip again with her husband, the late Dr. Salk, pioneer of the polio vaccine. Now, she's 97, and having trouble getting used to the idea that she's just three years away from 100.
But she's still painting, and three of her travel sketchbooks were just published. At Sotheby's in New York last month, her fans clamored to get signed copies.

As for when she knew she wanted to be an artist, Gilot said it wasn't much of a decision.

"Well, you know that is something that is not necessarily willful," she said. "From the age of 5, I started drawing a lot. Like for example, when I was at school, I was always drawing and that used to exasperate my teachers. They said, 'Are you listening?' I said, 'Yes, I am listening. The fact that I am drawing doesn't prevent me from listening.'"
She was 22 when she met Pablo Picasso in Paris. The artist was 40 years older, but they'd spend a decade together until she became the only woman ever to leave him. She told Anthony Mason about it two years ago in an interview for "CBS Sunday Morning."

The day she left, according to Gilot, Picasso said "merde."

She eventually found her way to New York and, as an artist, earned her own acclaim. With Salk, she traveled the world. They went to India in 1979 where she found herself fascinated by the saris.
While in Senegal in 1981, she was drawn to the dancers. But with her sketchbooks she does less documenting of what she says and more of what she feels.

She said most of her drawing took place on a plane, from memory.

"I'm not somebody who is good at working from nature … because reality is always contradicting me," she said. "We all have that type of experience. That reality is just there to annoy you and limit us. No, it's not exactly like that, you know."

Gilot still works every day, and at 97, thinks about hitting that century mark, an imposing number.
"Well, if I got there, you know, why not a little bit more?" 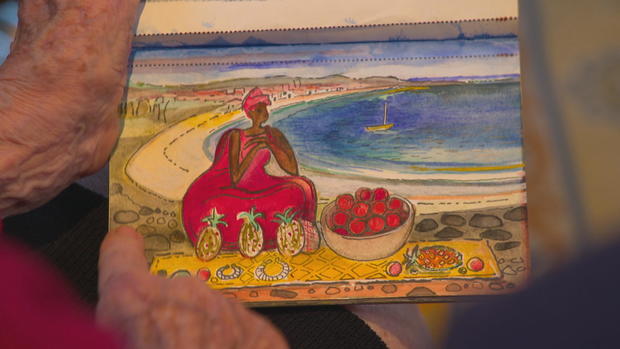