LOS ANGELES — A fast-moving wildfire in Southern California has scorched a historic movie site recently used by the HBO series "Westworld." It also prompted numerous celebrities to join thousands of others who have fled flames that have claimed homes and forced an evacuation of Malibu.

Kim Kardashian West, Scott Baio, Rainn Wilson and Guillermo del Toro are among those who have evacuated their homes. Some, like del Toro and Caitlyn Jenner, did not know the fate of their homes, but the wind-driven wildfire has destroyed the home of "Dr. Strange" director Scott Derrickson.

The blaze started Thursday night. By Friday, it had pushed toward Malibu and the Pacific Ocean, prompting evacuations in Malibu, Calabasas, Aguora Hills and other nearby areas.

The Woolsey Fire reached the ranch that has been the set of numerous movies over the years. The 2,700-acre ranch located between Malibu and the Conejo Valley was purchased by Paramount Sudios in 1927.

Western Town specifically was built for TV productions in the 1950s and was used for TV series including "The Cisco Kid" and "Dick Powell's Zane Grey Theatre." Filming continued for decades even as the ranch changed hands. It was acquired by the National Park Service in 1980 but has continued to function as a filming location, serving as a location for the first two seasons of the sci-fi series "Westworld."

HBO expressed concern for "all those affected by these horrible fires."

When not in use for filming, visitors could stroll through Western Town while hiking, or ride through on horseback. It is also the home of the Topanga Banjo•Fiddle Contest & Folk Festival held annually every May.

The Woolsey Fire reached the Bachelor mansion, according to reports, after Mike Fleiss, head of reality programming for ABC and the creator of The Bachelor, tweeted Friday that the mansion was "in grave danger."

Entertainment Tonight reported Friday afternoon the Villa De La Bina, as it's called, was partially destroyed by the fire. The latest season started filming at the mansion in September, but has since moved to other locations.

The location is home to three structures. The lower house was destroyed, according to The Hollywood Reporter.

Alyssa Milano said Friday her home was "in jeopardy" and tweeted, "If anyone can get 5 horses out the fire please help me."

The actress ultimately got the help she needed and tweeted later in the day that her "Horses are finally safe. My children are safe. My home is in jeopardy but… everything with a heartbeat is safe. Thank you all for your concern."

She is now helping to raise money for the California Fire Foundation and local animal shelters, tweeting and retweeting resources and ways her followers can help.

Actor James Wood is united with Milano in helping save animals. He also tweeted resources for horse owners seeking evacuation and called Milano's report that her family and horses were evacuated "good news."

Woods was not among those displaced, tweeting that he was on the East Coast. He asked his nearly two million Twitter followers to use the hashtag #CampFireJamesWoods to help share the names of those who are missing in a separate wildfire in Northern California.

Caitlyn Jenner posted a video to Instagram reassuring followers that she, partner Sofia and the dogs are "safe and sound." The status of Jenner's mansion featured on the TC show "I Am Cait" wasn't immediately known. Jenner has lived in the home since 2015.

The Woolsey Fire also forced Lady Gaga and her family to evacuate Friday. The singer and "A Star is Born" actress posted pictures and video of her family packing and leaving to her Instagram story. One photo depicted thick clouds of smoke and appeared to have been taken from inside a car. It was captioned "Sending my prayers to everyone today." 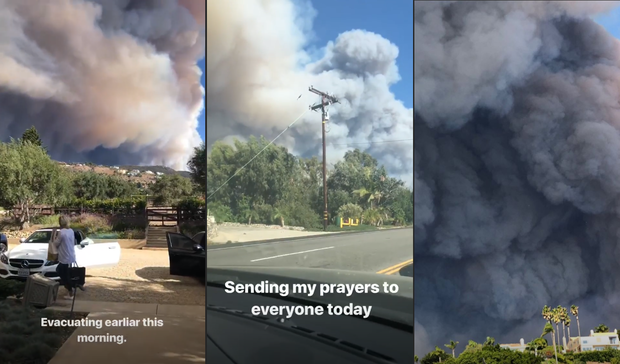