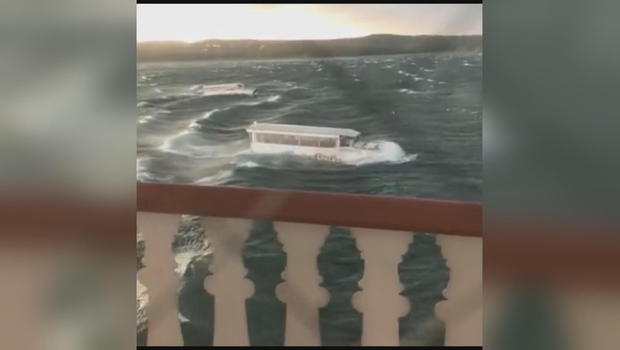 KANSAS CITY, Mo. — The captain of a tourist boat that sank in a southwest Missouri lake and killed 17 people, including nine members of one family, didn't tell passengers to put on flotation devices or prepare them to abandon ship, even after waves crashed into the boat during a severe storm, according to an indictment released Thursday. The federal indictment shows 51-year-old Kenneth Scott McKee faces 17 counts of misconduct, negligence or inattention to duty by a ship's officer resulting in death. The duck boat, a refurbished amphibious vessel originally used by the military during World War II, sank during a storm in July.

McKee is also accused of failing to properly assess the weather before and after the boat went into Table Rock Lake near the popular tourist town of Branson, U.S. Attorney Tim Garrison said during a news conference in Springfield. The prosecutor said he couldn't release specifics about the investigation, but added: "This is the beginning, not the end, of our efforts in this matter."

Ripley Entertainment, the company that operated the boats and suspended the operation following the accident, didn't immediately respond to messages from The Associated Press. McKee's attorney declined comment.

One of the survivors, Tia Coleman — whose husband, three children and five other family members died in the sinking — released a statement Thursday saying she was pleased an indictment had been filed.

"While nothing can ever ease the grief in my heart, I am grateful that the U.S. Attorney's Office is fighting for justice for my family, and the other victims, and is committed to holding fully accountable all those responsible for this tragedy," Coleman said.

The U.S. Coast Guard had found probable cause that the accident resulted from McKee's "misconduct, negligence, or inattention to the duties," according to an August court filing. The U.S. attorney's office added that the captain of a second duck boat that safely made it to shore during the storm acted in a "grossly negligent manner," though the court filing didn't elaborate on those findings.

The sinking killed Coleman's relatives while they vacationed from Indiana. The other people killed included two couples from Missouri, an Illinois woman who died while saving her granddaughter's life, an Arkansas father and son, and a retired pastor who was the boat's operator on land.

Several lawsuits have been filed on behalf of victims, their relatives and survivors of the sinking against Ripley Entertainment and other companies involved with the manufacture and operation of the boats. Robert Mongeluzzi, an attorney representing Coleman and several others who filed lawsuits, said he's confident the investigation will go beyond McKee.

A spokeswoman for Ripley Entertainment has repeatedly declined to comment on the investigation but has said the company has cooperated with authorities.

Garrison said McKee violated conditions specified in the boat's certificate of inspection by failing to tell passengers to put on personal floatation devices and not immediately increasing speed and driving to the nearest shore, according to the indictment.

The indictment also alleges McKee allowed the boat's plastic side curtains to be lowered, which blocked the exits, and didn't instruct passengers to put on flotation devices or prepare them to abandon ship even after the bilge alarm sounded twice.

After the accident, Coleman told CBS Indianapolis affiliate WTTV that the captain said, "don't worry about grabbing the life jackets — you won't need them," so none of her family members did.

"However in doing that, when it was time to grab them, it was too late and I believe that a lot of people could have been spared," Coleman said.

Video and audio from the boat, recovered by divers, showed that the lake was calm when the boat entered the water. But the weather suddenly turned violent and, within minutes, the boat sank. The wind speed at the time of the accident was more than 70 mph, just short of hurricane force, according to the National Transportation Safety Board. Weather forecasts had warned of an impending storm with winds possibly exceeding 60 mph.

In addition to the weather, the Coast Guard has said it was looking into regulatory compliance of the boat and crew member duties and qualifications.

Branson is among several places around the country where the amphibious vehicles offer excursions. Since 1999, 42 deaths have been associated with various duck boat accidents.

On May 1, 1999, 13 people died when the Miss Majestic duck boat sank on Lake Hamilton near Hot Springs, Arkansas. In 2015, five college students died and more than 70 people were hurt when a duck boat veered into a charter bus on a bridge in Seattle. Two Hungarian tourists died in 2010 when a stalled duck boat was struck by a tugboat-guided barge on the Delaware River in Philadelphia. 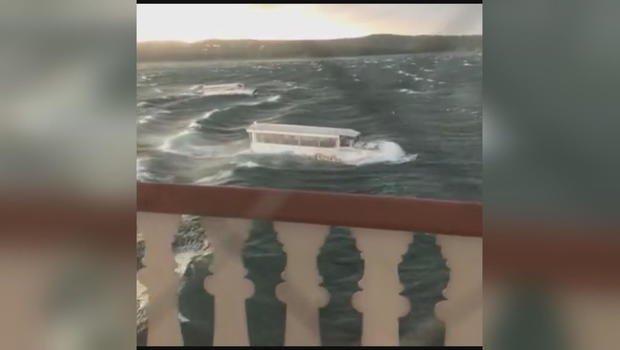