"Job gains have been strong, on average, in recent months, and the unemployment rate has declined. Household spending has continued to grow strongly, while growth of business fixed investment has moderated from its rapid pace earlier in the year," the Federal Open Market Committee, the Fed's rate-setting panel, said in its latest policy statement.

The benchmark federal funds rate remains in a range of 2 percent to 2.25 percent. The FOMC said it expects to continue gradually raising rates as the economy expands.

The Fed in September raised its benchmark federal funds rate for the third time this year, citing the strong labor market and healthy spending by consumers and businesses. It was the eighth hike since policymakers started to normalize monetary policy in late 2015.

Fed officials also upgraded their assessment of the economy, forecasting growth of 3.1 percent for the year. Most economists expect the Fed to next increase rates in December.

Michael Pearce, senior U.S. economist with Capital Economics, thinks that would be followed by two more rate hikes in the first half of 2019. "By the middle of next year, however, we expect economic growth to slow below its potential pace, which would force the Fed to the sidelines," he said in a note. 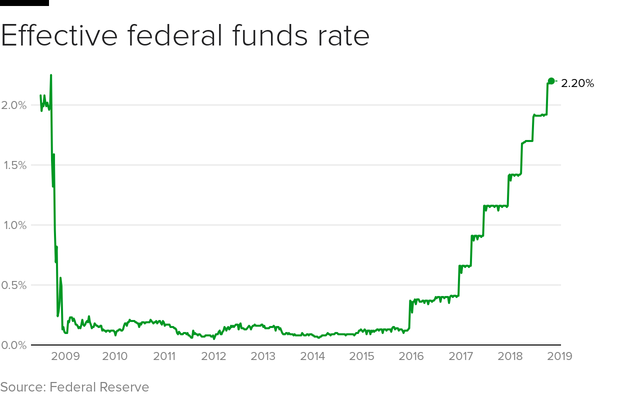 $1.6B Mega Millions: Some quirks, surprises behind the numbers