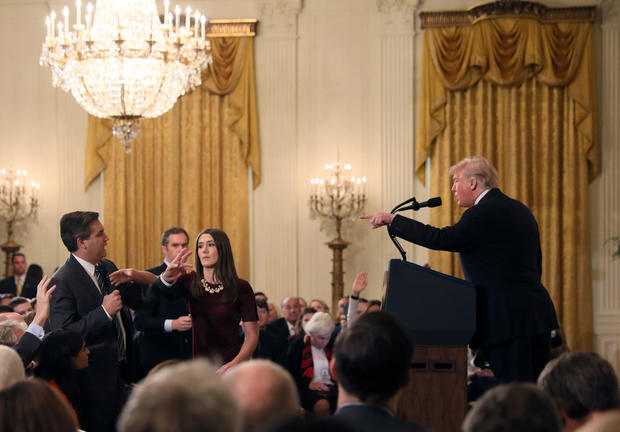 The White House has suspended CNN reporter Jim Acosta's press pass Wednesday, hours after he sparred with President Trump at a press briefing. Acosta posted a video on Twitter showing him being denied entry.

Earlier Wednesday, Acosta had questioned Mr. Trump on his rhetoric on the caravan moving toward the U.S. border. Mr. Trump grew angry with Acosta and tried to move on to another question. A White House intern came to take Acosta's microphone, but Acosta moved away and said "pardon me, ma'am" and tried to continue questioning.

Mr. Trump refused to answer, then said CNN should be "ashamed of itself for you working for them.

"You should be ashamed of yourself," Mr. Trump said. "The way you treat Sarah Huckabee is horrible … When you report fake news, as CNN does a lot, you are an enemy of the people."

The White House said it was suspending Acosta's "hard pass," which allows him press access to the White House, because it will "never tolerate a reporter placing his hands on a young woman just trying to do her job as a White House intern." But video recorded at the press briefing shows Acosta putting his arm on top of hers as she tried to take the microphone away from him. It appeared to be an accident since he said, "pardon me, ma'am" and moved away from her.

Acosta tweeted the White House's statement was a "lie." 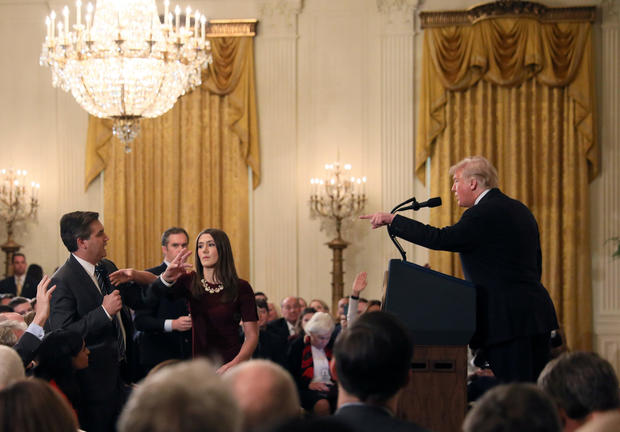