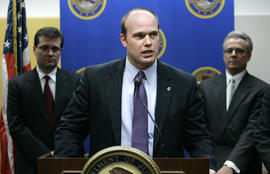 By Kathryn Watson CBS News November 7, 2018, 4:20 PM What Acting Attorney General Matt Whitaker has to do with Mueller's probe

Any final report from the probe, which has been a work in progress, will be handed to Whitaker and it will be his decision whether to make it public, Reid reports. It will also be Whitaker's decision whether to pass along evidence of any criminal wrongdoing by the president to Congress for any possible action.

Deputy Attorney General Rod Rosenstein, who has been overseeing the probe, still has a job. But now, Whitaker will oversee the Mueller probe and all other matters under the DOJ's purview. If Mueller approves any further charges to bring forward, Whitaker will have final approval.

The Justice Department has declined to answer whether ethics officials have been asked to review whether Whitaker should recuse himself from the Mueller probe. It's not clear whether his connections to Sam Clovis, who has been questioned in the Mueller probe, and with the president would be enough to force his recusal. Clovis and Whitaker are friends.

Now-former Attorney General Jeff Sessions, who worked with the Trump campaign, had recused himself from the Russia probe — one of President Trump's top complaints about him. Mr. Trump openly said more than once that if he had known Sessions would recuse himself, he might not have selected him to be the top law enforcement official in the country. He also lamented that in Sessions he had no attorney general. The president has sometimes said he wishes he had an attorney general who would fight for him over the Mueller probe, as he imagines former Attorney General Eric Holder would have for Obama.

He might have found that in Whitaker, who is reportedly very close to the White House — the New York Times profiled him in September and said that chief of staff John Kelly considers him the West Wing's eyes and ears at the Justice Department.

Whitaker, a former U.S. Attorney who had been Sessions' chief of staff, was publicly critical of Mueller and the investigation before joining the Justice Department. In August 2017, Whitaker penned an op-ed in CNN saying he agrees with the president that Mueller has "come up to a red line that he is dangerously close to crossing."

"It is time for Rosenstein, who is the acting attorney general for the purposes of this investigation, to order Mueller to limit the scope of his investigation to the four corners of the order appointing him special counsel," Whitaker wrote.

Senate Minority Leader Chuck Schumer said Whitaker should recuse himself, given those past comments critical of the scope of Mueller's investigation.

"Given his previous comments advocating defunding and imposing limitations on the Mueller investigation, Mr. Whitaker should recuse himself from its oversight for the duration of his time as acting attorney general," Schumer tweeted Wednesday afternoon.

Mueller's investigation has already led to the indictment of multiple former Mr. Trump campaign officials, as well as Russian nationals. The president's legal team and Mueller's team have been negotiating over the terms of possible questions for the president, although it's still unclear whether Mr. Trump will ever sit down with Mueller for an interview. 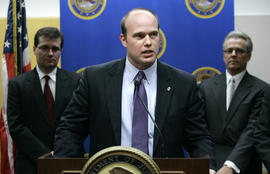