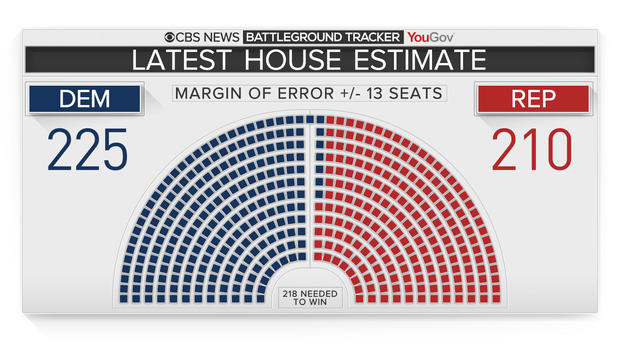 CBS News November 6, 2018, 5:48 AM The fight of their lives: GOP and Democrats wrestle for Congress

Tuesday is Election Day. Here's how you can follow the results, understand the stakes, and know which races CBS News is looking at.

Tuesday is Democrats' last, best chance to stifle President Trump's agenda before he completes his first term. At stake is control of the House and Senate, not to mention numerous statewide races, including a number of crucial governorships.

Democrats are likely to win the House, which Republicans have controlled since 2010. Under President Obama, the GOP used the chamber to investigate the White House and block Democratic priorities. Now Democrats are hoping to return the favor by flipping seats in the suburbs and some GOP-dominated rural areas.

Should Democrats win one or both chambers of Congress, it will be exceedingly difficult for Mr. Trump and the Republicans to pass major legislative priorities.

On the other hand, if Republicans maintain control of the House and Senate, they will have bucked history and delivered a major blow to the Democratic Party. The party in the White House very rarely keeps control of Congress in the first midterm after a presidential election; the last time it happened was 2002, when President George W. Bush was still massively popular in the wake on the 9/11 attacks.

It may not be easy for Democrats to take the House majority, since they will have to win a string of districts in Republican territory and get strong turnout, but they head into Tuesday in position to do so — even if narrowly. CBS News' current estimate is for Democrats to win 225 seats — just beyond the 218 needed for a majority — while Republicans win 210.

However, there is a margin of error of plus-or-minus 13 seats on each, keeping the possibility open that Republicans retain control.

Democrats need to win a net total of 23 seats to retake the House of Representatives.

A Democratic House would likely launch numerous investigations into Mr. Trump and his associates, and might even explore impeachment proceedings down the line. A Democratic House would also present a major roadblock to the administration's domestic agenda, likely blocking big-ticket items like Mr. Trump's proposed border wall and any attempts to privatize federal programs.

The GOP currently has 51 Senate seats compared to the Democrats' 49. But despite that slim Republican majority, 10 Democratic senators are fighting for reelection in states Mr. Trump won in 2016, meaning the odds are stacked in favor of the GOP.

Still, Democrats have a narrow chance of taking the U.S. Senate, which would potentially give them complete control of Congress if they take the House as well. Such a result could bring the government to a standstill – or it might drag Mr. Trump, an avowed fan of big deals, to the middle if he looks for common ground.

Big races to watch on CBSNews.com

In Georgia, Democrat Stacy Abrams would become the first black woman to be elected governor in U.S. history if she defeats Republican Brian Kemp.

In Missouri, Democratic Sen. Claire McCaskill is defending her seat against state attorney general Josh Hawley in a race that could decide which party controls the Senate.

Follow the coverage on CBSN, CBSNews.com, and your local CBS station. 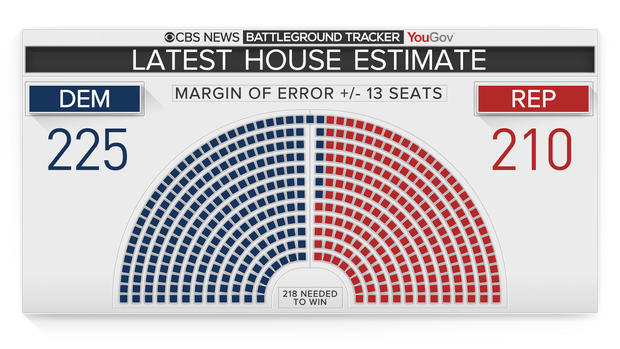