Thirty-six hours before polls open in Bucks County, Republican lawmaker Brian Fitzpatrick kicks off his shoes, perches next to a row of yellow mums and scans three-hundred constituent faces. "He doesn't belong to Donald Trump's Republican Party," Hindu leader Kamesh Patel tells his congregation before a Diwali celebration on Sunday. "He belongs to Abraham Lincoln's party."

The Civil War reference complements Fitzpatrick's repeated rejection of Washington's "Hatfield–McCoy stuff." It also resonates in a county that favored President Barack Obama by a 2-point margin and picked Hillary Clinton by even less – 2,999 votes, to be exact.

Fitzpatrick stands in a slightly different district this cycle. In early 2017, Pennsylvania's Supreme Court ruled the GOP-crafted congressional map violated the state's constitutional guarantee of "free and equal elections." A new chart nixed gerrymandered districts, including one notorious for its nonsensical "Goofy-kicking-Donald-Duck" shape. That left Fitzgerald in a sea of newcomers when Republican colleagues Charlie Dent and Ryan Costello opted to retire instead of jumping into bluer districts. While Trump still won 10 of the 18 new districts, the new map created at least two brand new blue districts, a key to Democratic hopes of taking back the House.

And Fitzpatrick has been running as a member of a party increasingly defined by its headline-snagging commander in chief.

"We're a microcosm of the entire United States of America," Fitzgerald says. "This is why a lot of people in the press come here every two years."

Fitzgerald is a former FBI agent who votes with President Trump 84 percent of the time. He also has an F from the NRA and won third place prize in a contest of bipartisanship. He voted against Republican efforts to repeal the Affordable Care Act, opposed the White House travel ban and introduced legislation mandating presidential candidates release their tax returns when Mr. Trump refused.

Fitzgerald has also knocked Mr. Trump's criticism of the FBI, says the president "was manipulated by Vladimir Putin," and wrote in Vice President Mike Pence's name on his 2016 ballot. In other words, if Bucks County is exhibit A of a swing district, Brian Fitzpatrick is exhibit A of today's moderate suburban Republican, an endangered species in Trump's America.

Scott Wallace, Fitzgerald's Democratic opponent, is a millionaire with a family history to back up his progressive chops. His grandfather, Henry Wallace, served as Franklin D. Roosevelt's second vice president, briefly edited The New Republic, and then ran for president on a far-left ticket in 1948.

On Sunday, at a rally twenty-three miles up I-276 from the Diwali celebration, Wallace walks out alongside a few recognizable Democratic faces – Gov. Tom Wolf, Sen. Bob Casey, plus a special guest: Illinois Sen. Dick Durbin, the minority whip.

"Has your life been like mine the past two years?" the Illinois Senator says. "Walking by the TV at the airport and cussing at Fox?" The crowd whistles. "Now," Durbin insists, Americans get a "chance to make a correction."

One of those corrections is Wallace, a 66-year-old former legislative counsel decked out in an Eagles cap, a navy blazer and faded jeans who bests Fitzpatrick 50-43 in the latest NY Times poll. If he wins, Wallace tells the crowd, "It will mean we're reclaiming democracy, reclaiming the truth."

Wallace looks up. "And we're reclaiming decency." He pauses. "And honor." He pauses again. "So simple."

Republicans worry that simple appeal gets simpler with each Trump rally. "The president's message, I'm afraid, is going to scare them," Pennsylvania Rep. Charlie Dent told CNN, referencing the voters Fitzpatrick and Wallace are fighting over. "Those guys aren't talking about the caravans, I can tell you that."

Neither is political rookie Greg McCauley as he makes the rounds in the new 6th Congressional District, which was built with pieces of Rep. Ryan Costello and Rep. Patrick Meehan's former districts. The latter resigned in April after settling a sexual harassment claim with $39,000 of taxpayer funds. Democratic nominee Hillary Clinton would have won in the new map by a grand total of 9 points, whereas she eked out a win in the old 6th District by just over half a point.

The Republican nominee, who has received no funding from the National Republican Congressional Committee, jokes he's still waiting on calls from both congressmen. "It's been difficult to raise money without a name brand." McCauley says. "I'm not Heinz Ketchup in this market."

McCauley – donning a distinctly northeast accent and a shock of white hair – speaks cyclically about college loan debt with a fervor and intonation reminiscent of Vermont Sen. Bernie Sanders. "It's the next bubble," he interjects over coffee and French fries at a cottage diner in Chadds Ford.

The fiscal conservative shakes his head when asked if he'd like the president's endorsement. "I'm not the Republican choice for this office. I'm here by absolute good fortune," he says, a way of acknowledging that he's only the GOP nominee because Meehan dropped out at the last minute.

"We have our blinders on," Maureen McCauley, his wife and campaign manager, says. Those blinders keep the family operation running on five or six hours of sleep a night, but fails to make up for their massive fundraising shortfall. McCauley has just over $83,000 cash on hand. His Democratic opponent, Chrissy Houlahan, has more than $1.6 million in the same pot.

"I'm an engineer and a veteran, and a business woman as well. I've been a teacher, too," chimes the former Air Force pilot."Oh my god. You're that person!" one friendly interjects, recognizing Houlahan's face from campaign advertisements.

The political newcomer interrupts spaghetti lunch to chat with sisters Mason and Oakley. "Do you know how many women are in Congress right now in Pennsylvania?" Houlahan cups her hand.

"Zero," she frowns. "And do you know how many men are in Congress in Pennsylvania? Eighteen!" Houlahan exclaims.

The former COO of a sports apparel brand says she her candidacy inspires young girls. But House Democrats and others like it motivate women to turn out and elect female Democrats in Pennsylvania. Houlahan is one of four women Democrats running for House seats this year.

"It's important voters understand what we're for," Houlahan tells canvassers collecting clipboards, rattling off topics of accessible healthcare, equal education and living wages. "We really are for the return to decency and the return to truth."

When Chrissy Houlahan approaches her penultimate door with news of Tuesday's election, former compliance manager Michelle Cook plants her forehead into her hand. "I know," she quips. "It is the only thing I've heard about for the past 2 years."

Houlahan lets out a laugh. "I'm terribly sorry. The good news is it will be over in the next two days."

"Only if it ends well," Cook counters. "When Barack Obama was president, and all the presidents before him, I never knew who any of the cabinet members were," she presses. "I didn't have to worry about it. That's what a representative government is supposed to be."

Houlahan nods. "It's good that we are attentive, but it's exhausting," the candidate offers.

The retiree sighs. "It's just a lot to keep track of." 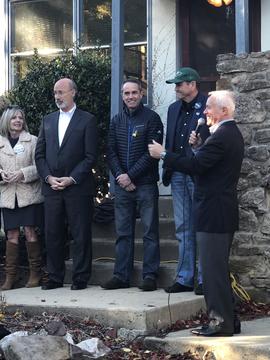 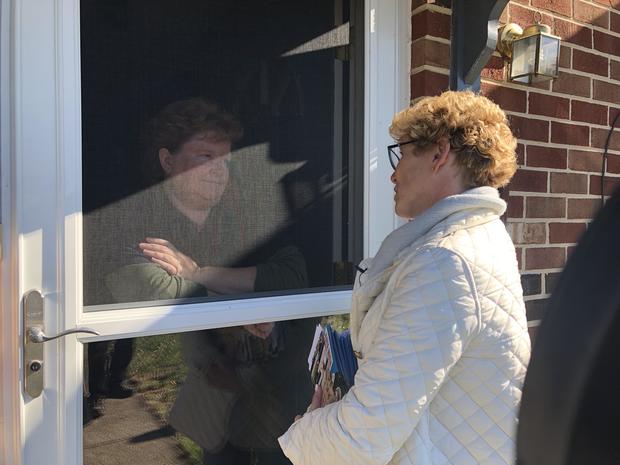