When British police first encountered Julian Cole after he was thrown out of a nightclub on the night of May 5, 2013, he was just enjoying a night out with his friends.

It's still unclear what happened in the next few minutes, but by the time he arrived at a nearby police precinct he was unconscious. Ultimately, Cole would suffer paralysis and permanent brain damage, and three officers would lose their jobs.

The officers lied about Cole's condition in statements and interviews, a Bedfordshire police panel found, resulting in their dismissals in October — more than five years after the incident.

While the panel's ruling brings some measure of relief for Cole's family, they say they still haven't received answers to their most pressing questions: how was their son paralyzed, who is responsible and how will they be held accountable?

"We are happy some of the lies have been exposed but our focus has always been to find out who injured Julian and to bring them to justice," the Cole family said in a statement to CBS News. "We won't stop… until they have had to answer for what they did in a criminal court."

This case has some parallels to the death of Freddie Gray, who died after being arrested by the Baltimore Police Department — something that is not lost on mother Claudia Cole.

"When I saw the photograph of Freddie Gray lying in hospital, I thought, "That is Julian, that is my son," she said in a statement read outside the U.S. embassy in 2015, shortly after Gray's death. "I felt sick to my stomach as it brought back so many memories of first seeing Julian in hospital."

"I am thinking of Freddie's mother today and what I know she is going through, how she must be feeling at this moment," she wrote in 2015. "She has completely lost her son, my son is still alive, but it can not be said that he is really living. "

Once a student athlete, Julian Cole, 25, now requires around-the-clock care and his mother spends hours by his bedside.

No one faces criminal charges in this case, a Bedfordshire police spokesperson tells CBS News.

A separate investigation was launched by the Independent Office for Police Conduct (IOPC), a non-departmental public body that probes serious allegations involving officers.

Investigators reviewed close to 3,500 pages of evidence — including witnesses and medical experts — resulting in a complex case that ended in September 2016, lasting nearly three times longer than three quarters of all investigations.

The IOPC provided the Crown Prosecution Service (CPS) with all of the evidence and determined no criminal charges were warranted. The Cole family requested a review of the evidence in 2017 and CPS reached the same conclusion a year later.

Cole, then 19, went out to the Elements nightclub with friends on May 5, 2013. He was later was escorted out, according to the BBC. After being denied a refund, he tried to get back inside the club multiple times and police were called.

A bouncer tackled Cole to the ground. Cole stood back up, according to the panel's final report and was allegedly acting in "an aggressive manner." He was then taken "to the ground again" by three police officers — Ross, Oates and Kalyan — and handcuffed.

The officers escorted Cole to the police van, where the panel notes he was complaining of neck pain. They then transported Cole to Greyfriars police station, and he was found not breathing.

Ross called an ambulance and paramedics administered CPR. He was taken to the hospital, where it was determined he had a spinal cord injury, then went into cardiac arrest.

In her records, Ross wrote Cole complained about his neck and she asked whether he could move his legs. The records make no mention about the tackle by the bouncer, which she later told investigators "shocked" her.

The panel found that Ross' account of that night was "totally unconvincing." They surmised that if she was truly shocked by the takedown, there would be a mention in her records as to the reason why she asked Cole to move his legs.

Kaylan was also found to have lied when he stated that he heard Ross ask Cole if he could move his legs, and that he moved them in response, according to the panel's report.

Oates also claimed that Cole walked to the police van during his arrest, which the panel says he knew was not true.

The panel cleared Ross of accusations that she used excessive force when she handcuffed Cole.

The panel contends the three "did not ask any basic questions concerning his welfare." However, the panel added this was "unlikely to have changed the outcome."

The Cole family says the hearing was never about the cause of his injuries. Family attorney Rachel Harger said in an emailed statement the panel's findings are inconclusive on how he was paralyzed and said they would call on the IOPC to re-open their investigation.

"There is no closure for us and there is no question of justice until we at least know the truth about what happened," Claudia wrote in 2015. 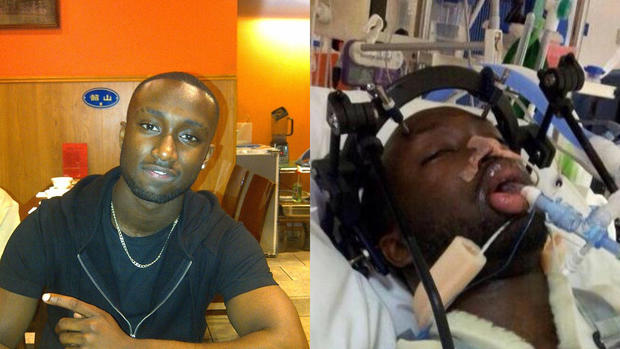