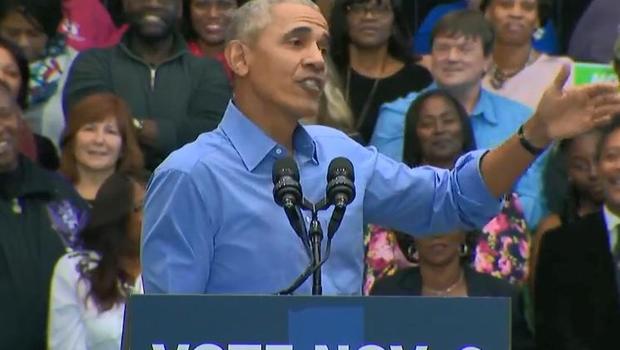 GARY, Ind. — Former President Obama praised Indiana Democratic Sen. Joe Donnelly Sunday for being willing to break with his party, telling a roaring crowd at a rally in the state that "you don't want just a yes man."

Donnelly has sounded more like President Trump while trying to persuade voters in the conservative Midwestern state to grant him a second term. He's angered some Democrats by tacking to the right in recent weeks and embracing some of Mr. Trump's pet priorities, such as building a border wall with Mexico.

But Mr. Obama told voters during the rally in Gary that Donnelly "tries to do right by people" – not just his party – and noted he supported the Affordable Care Act, the health care overhaul passed under Mr. Obama.

"Joe Donnelly and I didn't agree all the time. But Joe always let me know where he stood and I knew what he believed in and that he always was focused on: 'What's the best thing for the Hoosiers that he served?"' Mr. Obama said. "He was honest and he was direct. So you can count on that. That's what you want. You don't want just a yes man all the time."

Mr. Obama's stop was sandwiched between his successor's trips to the state Friday and Monday on behalf of GOP Senate candidate Mike Braun.

It was also part of a series of appearances as the two presidents hit the campaign trail hard appearances in the days leading to Tuesday's midterm elections.

For Braun, a businessman who has campaigned as a steadfast Trump ally, the current president's appearances in Indianapolis and Fort Wayne are no-brainers in a state he won two years ago by 19 points.

But for Donnelly, who frequently touts how often he votes with Mr. Trump, the Obama rally was a little more complicated.

"If he does need to inoculate himself from some of his firmer conservative rhetoric, it's a pretty effective way to do it," said Christina Hale, a former state lawmaker and the Democratic nominee for lieutenant governor in 2016.

Mr. Obama has proven a polarizing figure with independent and Republican voters and is credited with some of Indiana's rightward political shift, even though he won the state in 2008. To win in Tuesday's election, Donnelly not only needs high turnout from his party's base but also must peel off some moderate Republicans and independents.

That's why Sunday's rally in Gary, a heavily African-American city that has more in common with the Democratic stronghold of nearby Chicago than deep red parts of the state, could prove strategic. The northwest Indiana region supported Hillary Clinton in 2016, and driving turnout there on Tuesday will be critical for Donnelly.

A spokesman for Braun, Josh Kelley, said Donnelly was "doubling down on the liberal resistance movement" by campaigning with Mr. Obama.

Mr. Obama criticized Republicans for passing a tax bill that benefited the wealthy and for trying to end protections for pre-existing conditions provided through the Affordable Care Act.

And without mentioning Mr. Trump's name, he told the crowd they could return the country to a kinder, less divisive kind of politics.

"On Tuesday you can vote for politics that is decent and honest and lawful and tries to do right by people like Joe Donnelly does," he said, adding at one point that his voice was growing hoarse from all his campaigning in recent days.

Mr. Trump was keenly aware of Mr. Obama's visit, which he mentioned Friday during an event at an Indianapolis-area high school.

"It's no surprise that Joe Donnelly is holding a rally this weekend with Barack H. Mr. Obama," Mr. Trump said as the crowd jeered. He later added: "We don't want to go back to the Mr. Obama days."

As a red-state Democrat, Donnelly has had a target on his back ever since he unexpectedly defeated Republican Richard Mourdock in 2012, when the former state treasurer said a woman who gets pregnant from her rapist is carrying a "gift from God."

Donnelly has walked a delicate line since then, often frustrating his own party and Republicans alike with the votes he takes.

Mr. Trump was having none of it on Friday, tying Donnelly to "radical left" figures in the party who are widely reviled by the GOP base. 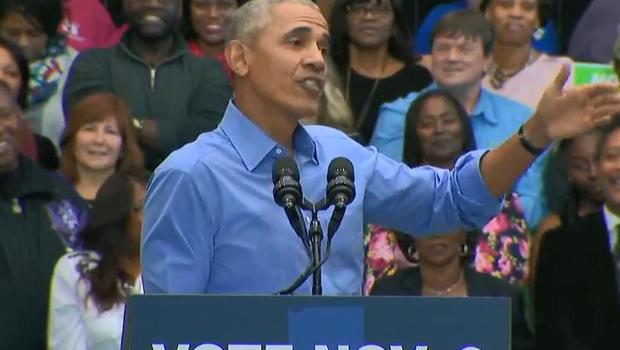