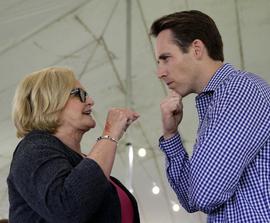 By Dean Reynolds CBS News November 5, 2018, 6:36 PM McCaskill tries to have it both ways on immigration while in neck-and-neck battle for her seat

SPRINGFIELD, Mo. — In the last days before the midterm elections, Sen. Claire McCaskill's political compass at times veers rightward. But she insists she's not one of those "crazy Democrats." Nor is she a softy on that caravan of migrants the president calls a threat.

"I think that we have to make sure that we secure the borders and if there is an orderly process under the law that allows people to come to our borders to turn themselves in for asylum," she told CBS News.

Last week, McCaskill even said the president should use every tool at his disposal against the migrants. But on Monday, she clarified, and when asked if her support includes shooting at the migrants, she said "no."

A bit of positioning can be prudent politics. But critics say backing and then opposing the president is a bid to have it both ways in a state Mr. Trump won by almost 19 points.

Missouri Attorney General Josh Hawley, a lock-step supporter of the president, is challenging McCaskill and says she's a liberal — plain and simple.

Latest surveys show almost a dead heat between the candidates and because there's no early voting in Missouri, it's tough to gauge enthusiasm. So both campaigns are calling voters and making sure they get to the polls. 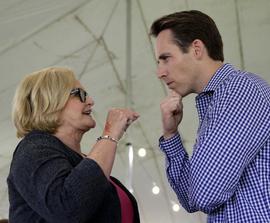