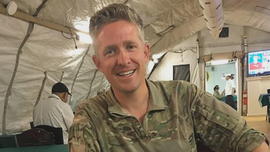 NORTH OGDEN, Utah — A community in Utah is in mourning after its mayor, Brent Taylor, was killed in Afghanistan while he was deployed with the National Guard. His body is scheduled to arrive in the U.S. Monday night. With two months left in his year-long tour, the 39-year-old died Saturday after one of his Afghan trainees shot him in an insider attack. Afghan forces reportedly killed the attacker.

Taylor is the third U.S. soldier to be killed in an insider attack in Afghanistan since July. Seventeen years after 9/11, there are still some 15,000 U.S. troops in the country – many whose main job is to train and advise Afghan forces. Nearly half of this year's American combat deaths in Afghanistan have reportedly come from suspected insider attacks, reports CBS News correspondent John Blackstone.

Michael O'Hanlon, senior fellow at the Brookings Institute, is a researcher and author who specializes in U.S. military strategy.

"It's a deliberate tactic on their part to kill people like Mayor Taylor and to try to therefore affect American will," O'Hanlon said. "This tragic attack brings the need to ask ourselves again: is there really a light at the end of the tunnel?"

On Heroes Boulevard in North Ogden, banners are displayed to honor community members serving in the military. The one paying tribute to Taylor has now become a memorial, as the city mourns a fallen soldier who was also their beloved mayor.

As a married father of seven, an Army National Guard major, and longtime mayor of North Ogden, Utah, Taylor devoted his life to helping others.

"There are three great loyalties that have guided my life and everything in it: God, family, and country," Taylor said on Facebook.

In January, Taylor announced on Facebook that he would be taking a leave of absence as mayor in order to deploy overseas for a fourth time. His mission: training the staff of an Afghan battalion command.

"I know he was encouraged not to go but he volunteered because he thought he could do something good," Utah Gov. Gary Herbert said.

Taylor's best friend Toby Mileski said his children have lost a role model and the country has lost a hero.

"He did what he did because he wanted to make sure there were no injustices," Mileski said.

Taylor is being remembered as a man who wanted to make the world a better place.

City administrator Jon Call worked with him. "My heart bleeds for those kids. I just can't imagine what they're going to go through," Call said.

Less than a week before his death, Taylor wrote what would be his final post on Facebook. He urged all Americans to vote regardless of party, saying it's important to remember that as Americans, we have far more that unites us than divides us. 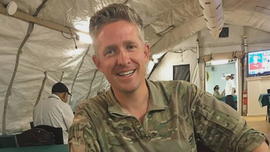