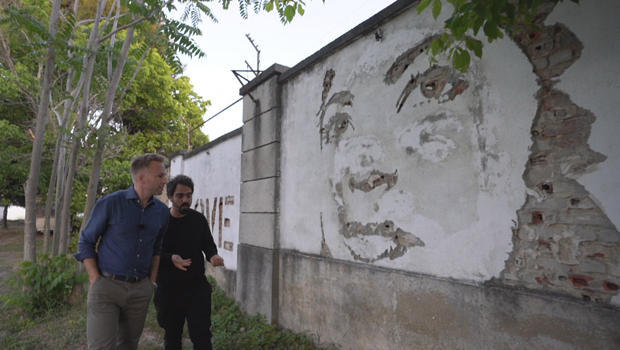 Fitted with a hard hat and respirator, and hoisted well above street level, Alexandre Farto paints an unlikely image of a portrait artist at work – one who uses not a delicate brush, but drills and jackhammers to create very large-scale pieces.

Seth Doane asked, "When you're doing this, are you constantly running back and forth, trying to get the perspective?"

"Yeah. You need to really go back-and-forth to really realize the proportions and how things are coming together."

He showed Doane where he carved out his tag-name, Vhils, which he came up with back when his art was considered vandalism. "It was kind of my nickname that I used to protect my identity as well, because in the beginning I was doing some stuff that was illegal."

"Did you ever get in trouble?" Doane asked.

Growing up, Vhils used his lunch money to buy spray paint, and got his training on the streets of Lisbon doing graffiti, working quickly to evade authorities. When asked if, as a kid, he saw himself as an artist or a punk, Vhils laughed, "Mostly as a punk, yeah!"

Today he has his own studio. Inside, Doane saw him at work using that same de-constructive approach. Up close, the work appears rough, random and chaotic … until, from a distance, a portrait emerges.

The portrait is of a person from Lisbon. "What I really like is to kind of work on everyday people that live in cities we live in," he said.

His subjects are usually anonymous; he calls them "everyday heroes." The 31-year-old artist likes the idea of elevating ordinary people and materials to the realm of art.

"Instead of painting with colors, I paint with layers of the passage of time, of the history of the city," he said, such as using old posters which can be peeled back, layer by layer.

"So, we see old billboards; you see the potential for art?" Doane asked of stacks of posters in his studio.

Not surprisingly, it's his large-scale work that first gained Vhils attention.

In Los Angeles, he used the side of a film studio as his canvas – his trademark chiseled style stands out from the painted portion of his collaboration with American street artist Shepard Fairey, widely known for his iconic image of Barack Obama.

Vhils, with his signature style, has transformed buildings across the globe, from L.A. to New York, Moscow to Hong Kong. He sees his work as a sort of artist-archeologist: "Each city has their own history. And through the walls I could, instead of using paint to paint the portraits, I was carving, exposing the real layers that were present 100 years ago," he said.

He's fueled the flourishing street art scene in his native Lisbon, where murals have transformed the city, adding a colorful touch to the otherwise overlooked or mundane.

Early on, Vhils benefited from the support of Banksy, perhaps the world's most famous street artist.

"Not just to me, but to the whole community of artists that were working in the public space," said Vhils. "He really put this movement on another level."

Once seen as vandalism, Vhils' work is now considered an asset. In some cases, cities are commissioning him to scrape and chip into buildings. His work also appears in galleries, often touching on the themes of globalization and urban development.

And he's constantly tweaking – or "blowing up" – his technique; using explosives is one of his newer approaches, which the band U2 used in one of its videos.

Watch Vhils' explosive art as featured in the U2 music video, "Raised by Wolves":

Vhils said, "I wanted to create something that was kind of a metaphor for how sometimes you just need a spark."

But working outside in public spaces means his art won't last. "I like the fact that the artwork will evolve – it will eventually fade away or be destroyed – because it makes it more human," he said.

"The finishing touch on your work is, it's falling apart?" Doane asked.

"It's the nature of things. Nothing lasts forever."

While it lasts, the idea is to make people look up and see something differently, using destruction to create, and to reveal another dimension beneath the surface. 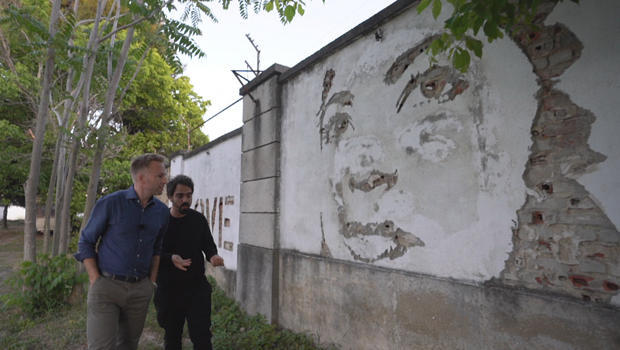 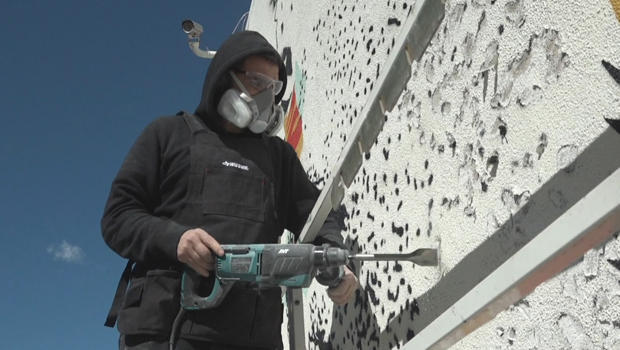 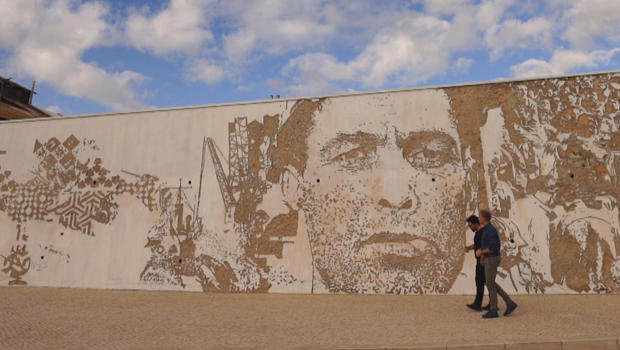 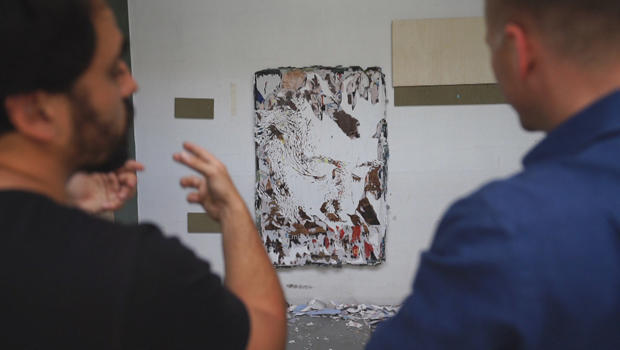 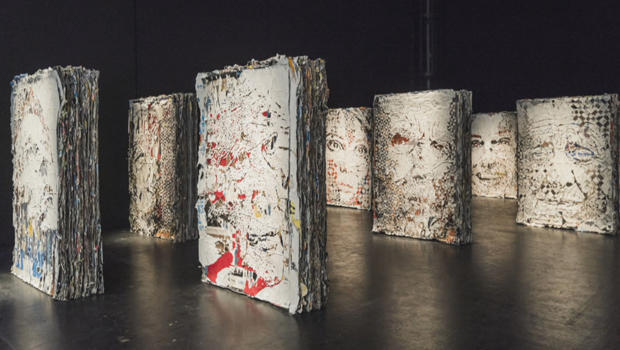 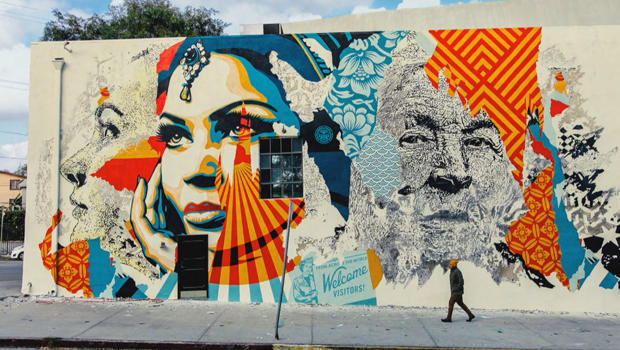 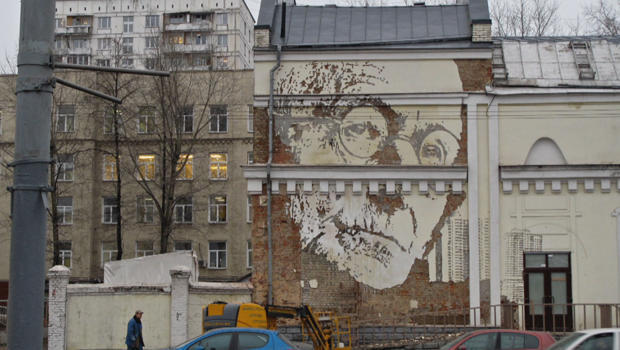 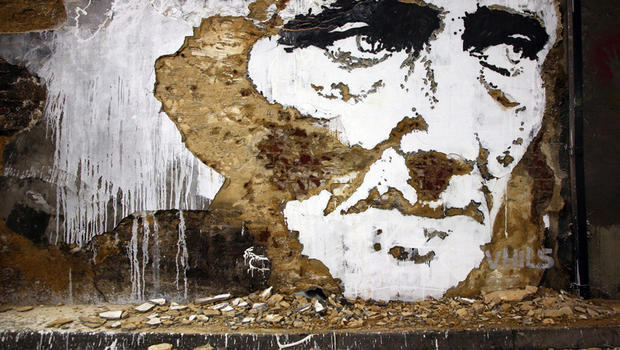 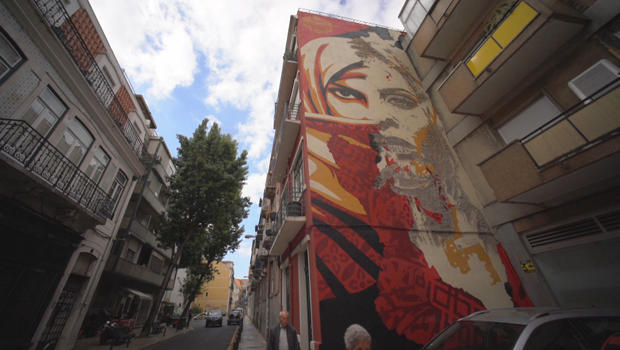