Grande's song "Thank You, Next" included lyrics about Davidson. She sings "Even almost got married / To Pete I'm so thankful." Grande and Davidson had a whirlwind romance that included matching tattoos and an engagement. But it lasted only a few months before they announced two weeks they had split up.

Davidson, who had joked about their relationship in the few "SNL" episodes that aired while they were dating, asked musicial guest Maggie Miller to marry him in the promo for this week's episode. Davidson also joked about the break-up during a comedy show with Judd Apatow, saying "Well, as you could tell, I don't want to be here. There's a lot going on."

After the promo aired, Grande tweeted "For somebody who claims to hate relevancy u sure love clinging to it huh" and then "thank u, next." Both tweets were later deleted.

Davidson briefly addressed the break-up during a "Weekend Update" routine about the midterms. Kicking off the sketch, he said "so, the midterm elections are obviously a huge deal, and after I had to move back in with my mom, I started paying attention to them."

He closed the routine off by saying "and the last thing I will say is, I know some of you are curious about the breakup but the truth is, it's nobody's business, and sometimes things just don't work out, and that's OK. She's a wonderful, strong person, and I genuinely wish her all the happiness in the world. Now please, vote on Tuesday."

Grande mentioned her ex-boyfriend Mac Miller, who died in September. "I wish I could thank you to Malcolm / 'Cause he was angel."

Grande was scheduled to be the musical guest for the "SNL" season premiere, but canceled after Miller's death, citing "emotional reasons." 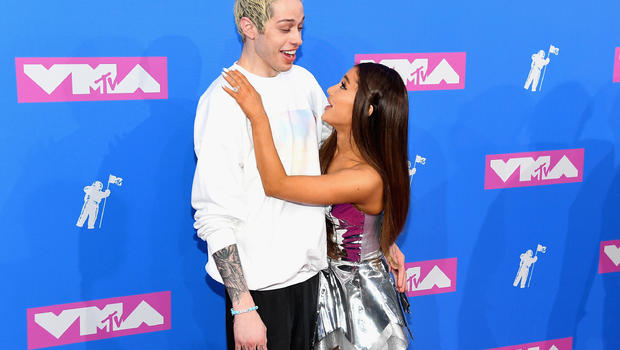