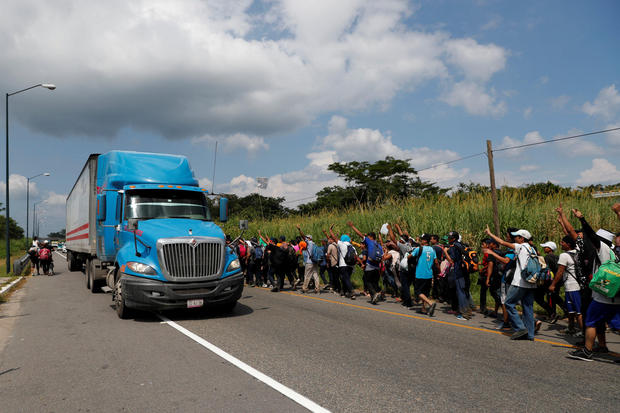 CBS/AP November 2, 2018, 11:11 PM Mexican official offers buses to migrant caravan to go to Mexico City or "to the place they wish"

DONAJI, Mexico — After three grueling weeks walking along highways and hitching rides in pickups and flatbed trucks, thousands of Central American migrants traveling in a caravan through southern Mexico learned Friday that they would soon be leapfrogging ahead to the nation's capital in buses. Meanwhile in the U.S., President Trump has made the caravan a key election issues, telling crowds "this will be the election of the caravan."

As the caravan crossed into the Gulf coast state of Veracruz, Gov. Miguel Angel Yunes announced that authorities there would be providing not only humanitarian assistance but also offering mass transportation for the migrants.

"It is very important that they be able to move soon from Veracruz toward another place," Yunes said in a video message released in the evening. "For that reason, we also offered them transportation so that, if possible, tomorrow … they may be able to go to Mexico City or to the place they wish."

During an evening assembly, caravan organizers told the migrants that they would be leaving around 5 a.m. for the capital in dozens of buses, apparently enough to accommodate the several thousand people in the group.

"We are all going!" one the coordinators told the group.

Organizers said women and children would be given priority, and the buses would depart in groups of 10 for a trip expected to take 10 to 12 hours.

The announcement came after the migrants' request for buses to Mexico City were ignored by the Mexican government days earlier when they were in Juchitan, Oaxaca state.

Earlier in the day, a third caravan of migrants – this time from El Salvador – waded over the Suchiate River into Mexico on Friday, bringing another 1,000 to 1,500 people who want to reach the U.S. border.

The third caravan tried to cross the bridge between Guatemala and Mexico, but Mexican authorities told those traveling in it they would have to show passports and visas and enter in groups of 50 for processing.

The Salvadorans expressed misgivings that they would be deported, so they turned around and waded across a shallow stretch of the river to enter Mexico.

Although police were present, they did not try to physically stop the migrants, who later walked along a highway toward the nearest large city, Tapachula.

Mexico is now faced with the unprecedented situation of having three caravans stretched out over 300 miles (500 kilometers) of highways in the southern states of Chiapas and Oaxaca, with a total of about 6,000 migrants. The first, largest group of mainly Honduran migrants entered Mexico on Oct. 19.

Though the first caravan once numbered as many as 7,000, it has shrunk significantly. It has been hard to know their exact numbers as people scatter across highways and in small towns. Mexico's Interior Department estimated that, as of Friday, it numbered only 3,000 people. Other estimates had it around 4,000 or more.

The second caravan, also of about 1,000 to 1,500 people, entered Mexico earlier this week and is now in Mapastepec, Chiapas. The second group includes Hondurans, Salvadorans and some Guatemalans. In addition, the government identified a fourth, smaller group of 300 Central American migrants walking further ahead, in the Gulf coast state of Veracruz.

It remained unclear how many migrants would make it; 20 days of scorching heat, constant walking, chills, rain and illness had taken their toll. Mexico's Interior Department says nearly 3,000 of the migrants in the first caravan have applied for refuge in Mexico; hundreds more have returned home.

Honduran migrant Saul Guzman, 48, spent the night under a tin roof in the Oaxaca state town of Matias Romero with his son Dannys, 12, before setting out for the town of Donaji, 30 miles north.

"I have been through a lot," said Guzman. "I want to spend my time differently, not in poverty."

In his hometown of Ocotepeque, Honduras, he left behind a coffin, either for his mother, who suffers dementia, "or for me, if I don't make it," Guzman said.

The migrants made a grueling 40-mile trek from Juchitan, Oaxaca, on Thursday, after they failed to get the bus transportation they had hoped for. Hitching rides on Friday allowed them to arrive early at their destination for the day, Donaji, and some headed to a town even farther north, Sayula.

Another large caravan early this year passed through Veracruz but then veered back toward Mexico City and eventually tried to head to Tijuana in the far northwest. Few made it.

Immigration agents and police have been nibbling at the edges of the first two caravans.

A federal official who was not authorized to be quoted by name said 153 migrants in the second caravan were detained Wednesday during highway inspections in Chiapas, a short distance from the Guatemalan border.

There has also been pressure on the first caravan. Federal police began pulling freight trucks over and forcing migrants off, saying their habit of clinging to the tops or sides of the trucks was dangerous.

At other points along the route, police have forced overloaded pickups to drop off migrants. On previous days, they have ordered passenger vans to stop helping with transportation.

Mr. Trump has ordered U.S. troops to the Mexican border in response to the caravans of migrants. More than 7,000 active duty troops have been told to deploy to Texas, Arizona and California.

U.S. military units in San Antonio and other locations in Texas, California, and Arizona are going through specific training and rules along the border, CBS San Antonio affiliate KENS reports. Joint Base San Antonio – Lackland Air Force Base is one of the primary locations where training is underway.

Mr. Trump said he has told the U.S. military mobilizing at the southwest border that if U.S. troops face rock-throwing migrants, they should react as though the rocks were "rifles." He also plans to sign an order next week that could lead to the large-scale detention of migrants crossing the southern border and bar anyone caught crossing illegally from claiming asylum.

Though some migrants clashed with Mexican police at a bridge on the Guatemala border, they have repeatedly denied coming with any ill intentions, saying they're fleeing poverty and violence.

"We aren't killers," said Stephany Lopez, a 21-year-old Salvadoran with the first caravan.

Similar caravans have occurred regularly over the years and passed largely unnoticed, but Trump has focused on the latest marchers seeking to make border security a hot-button issue in next week's midterm elections. 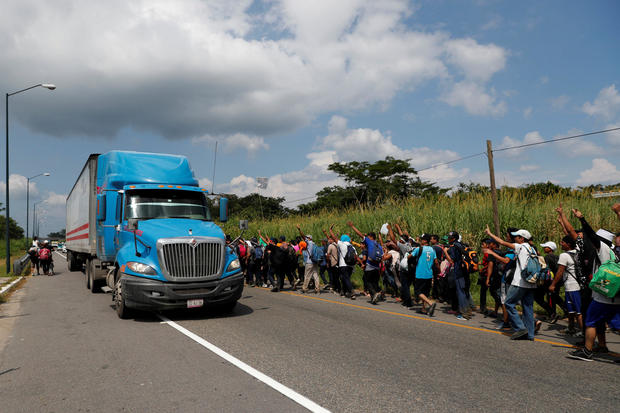 Cruise ship rescues fishermen who were stranded for weeks

Man to get new kidney thanks to billboard campaign