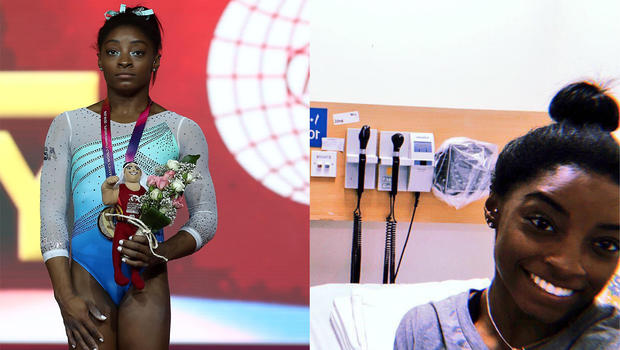 Simone Biles made history on Thursday by becoming the first woman gymnast to win four all-around world championships. Not only did Biles break a record at the 48th Artistic Gymnastics World Championships in Doha, Qatar, she overcame several challenges — including her own high standards, The Associated Press reports.

Biles made several mistakes during the competition but still managed to dominate. She slipped off the beam and stepped out of bounds on her floor exercise. She also sat down her vault in the first rotation. But what makes her historic win even more astounding is that Biles was battling kidney stones while competing.

Despite her win, Biles was underwhelmed by her performance. "It's not the gymnast that I am, to go out there and kind of bomb a meet like this," Biles said. "Even though I won, I wish it were a little bit different."

Less than a week ago, the 21-year-old was hospitalized with kidney stones. "This kidney stone has nothing on world championships," she wrote on Instagram, sharing a smiling selfie from her hospital bed.

Biles thought about toning down the difficulty of her floor routine, the AP reports. But toning things down is simply not in her nature. "I would never," Biles reportedly said. Her floor exercise is as hard as what men usually do, a degree of difficulty other women can't match.

The tenacious gymnast got an all-around score of 57.491, earning her a fourth world all-around title. "I'm still disappointed in myself, because I know what I can do out there — despite the all-around, you know, winning gold. It doesn't show who I am," Biles said in an interview with USA Gymnastics after the meet.

Her teammate, Morgan Hurd, was disappointed by the outcome. "It's absolutely insane that she fell twice and won," Hurd said, according to the AP. "I have no words." Biles beat Hurd by by more than 1.6 points.

"I guess it's good to be back on the podium, even with the falls. But it just sucks. It just sucks, man," Biles said. She called her team "a strong group of girls."

Despite Biles' mistakes during the meet, her coach, Laurent Landi, justified her win. "She has (such) great ability that she needs to push it to the limit," Landi said. "And when it goes very well, it's amazing. When it doesn't go well, it's still good enough."

Biles and 17-year-old Hurd, who won bronze, were seen hugging after the tense competition. The teammates are competing in the finals today, where Biles hopes to "redeem" her problematic — yet winning — performance from Thursday. 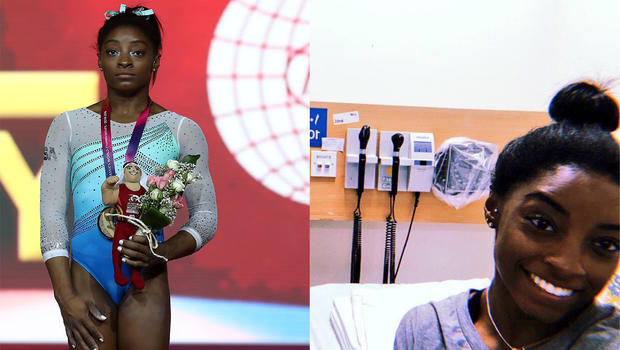