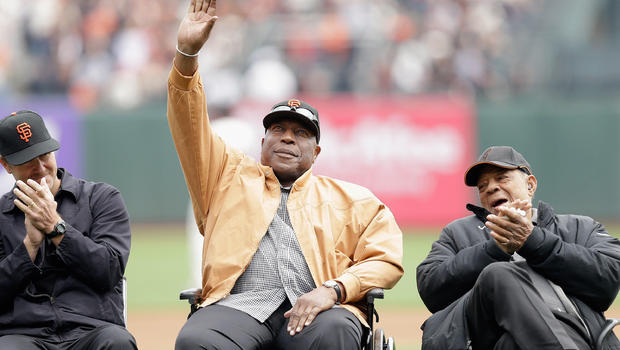 SAN FRANCISCO — Willie McCovey, the sweet-swinging Hall of Famer nicknamed "Stretch" for his 6-foot-4 height and those long arms, died Wednesday. He was 80. McCovey had attended games at AT&T Park as recently as the final game of last season.

San Francisco Mayor London Breed issued a statement to CBS San Francisco saying McCovey "brought joy to so many San Franciscans through his years on the field and dedication to our city. He was one of the greatest baseball players of all-time and also the quintessential San Francisco Giant."

Breed said that City Hall would be lit in orange in honor of McCovey.

A first baseman and left fielder, McCovey was a .270 career hitter with 521 home runs and 1,555 RBIs in 22 major league seasons, 19 of them with the Giants. He also played for the Athletics and Padres.

McCovey made his major league debut at age 21 on July 30, 1959, and played alongside the other Willie – Hall of Famer Willie Mays – into the 1972 season before Mays was traded to the New York Mets that May.

"You knew right away he wasn't an ordinary ballplayer," Hall of Famer Hank Aaron said, courtesy of the Hall of Fame. "He was so strong, and he had the gift of knowing the strike zone. There's no telling how many home runs he would have hit if those knees weren't bothering him all the time and if he played in a park other than Candlestick."

McCovey had been getting around in a wheelchair in recent years because he could no longer rely on his once-dependable legs, yet was still regularly seen at the ballpark in his private suite.

"I love him so much. It's a very sad day for me. We were very close," Hall of Famer Orlando Cepeda said in a telephone interview. "Willie McCovey was not only a great ballplayer but a great teammate. He didn't have any fear. He never complained. I remember one time in 1960 they sent him down to the minor leagues after being Rookie of the Year the year before. He didn't complain. He was very polite, he was very quiet. He was a great man, a great friend. I'm going to miss him so much. He didn't say a bad word about anybody."

While the Giants captured their third World Series title of the decade in 2014, McCovey returned to watch them play while still recovering from an infection that hospitalized him that September for about a month.

He attended one game at AT&T Park during both the NL Championship Series and World Series. He even waited for the team at the end of the parade route inside San Francisco's Civic Center.

"It was touch and go for a while," McCovey said at the time. "They pulled me through, and I've come a long way."

McCovey had been thrilled the Giants accomplished something he didn't during a decorated career in the major leagues.

Even four-plus decades later, it still stung for the left-handed slugging "Big Mac" that he never won a World Series after coming so close. He lined out to end the Giants' 1962 World Series loss to the Yankees.

He often thought about that World Series, which the Giants lost in seven games to New York, and it remained difficult to accept. The Giants lost 1-0 in Game 7 when McCovey lined out to second baseman Bobby Richardson with runners on second and third for the final out.

McCovey narrowly beat out Mets pitcher Tom Seaver for the 1969 MVP award. McCovey led the NL in home runs (45) and RBIs (126) for the second straight year, batting .320 while also posting NL bests with a .453 slugging percentage and .656 on-base percentage. He was walked 121 times, then drew a career-high 137 free passes the next season.

He had been third in the '68 voting for NL MVP, but after 1969 would never again finish higher than ninth.

McCovey and Ted Williams before him were among the first players to really face infield shifts as opponents tried to affect his rhythm at the plate.

"I will cherish the time I spent with you. To talk to an all time great like Willie McCovey was a dream. May you rest in Peace," outfielder Andrew McCutchen, who spent part of the 2018 season with the Giants, wrote on Twitter.

McCovey was born on Jan. 10, 1938, in Mobile, Alabama. He had spent the last 18 years in a senior advisory role for the Giants.

"For more than six decades, he gave his heart and soul to the Giants," team president and CEO Larry Baer said. "As one of the greatest players of all time, as a quiet leader in the clubhouse, as a mentor to the Giants who followed in his footsteps, as an inspiration to our Junior Giants, and as a fan cheering on the team from his booth."

Said McCovey's wife, Estela, whom he married this past summer: "Every moment he will be terribly missed. He was my best friend and husband. Living life without him will never be the same."

McCovey had a daughter, Allison, and three grandchildren, Raven, Philip, and Marissa. McCovey also is survived by sister Frances and brothers Clauzell and Cleon.

McCovey said that 2010, when the Giants won the franchise's first World Series championship since moving from New York in 1958, it helped eased the pain for players like him, Juan Marichal, Mays and Felipe Alou. Seeing San Francisco in the Fall Classic again brought those smiles back to McCovey's face even more.

"We're kind of getting spoiled," he said in 2012. "This is two in three years. People don't realize how hard it is to get here. We've been pretty lucky."

McCovey presented the "Willie Mac Award" each season – except in 2014 while dealing with complications from the infection – an honor voted on by the players, coaches and training staff to recognize the team's player most exhibiting McCovey's inspirational example both on the field and in the clubhouse. He was there this year as reliever Will Smith was honored.

"Something I will cherish forever," Smith wrote on Twitter on Wednesday. "May he Rest In Peace."

When San Francisco opened its new waterfront ballpark in 2000, the cove beyond the right-field fence was named "McCovey Cove" in appreciation of all he did for the organization. There's a statue of McCovey's likeness on the other side of the water from where those splash hits land.

"Willie McCovey was one of our game's greatest power hitters. He won the National League MVP in 1969 and, alongside fellow Hall of Famer and Alabama native Willie Mays, was a key part of many memorable Giants' teams," Commissioner Rob Manfred said. "For 22 years on the field and many more after retiring, Willie was a superb ambassador for the Giants and our game."

The Giants said a public celebration of McCovey's life would be held at a later date. 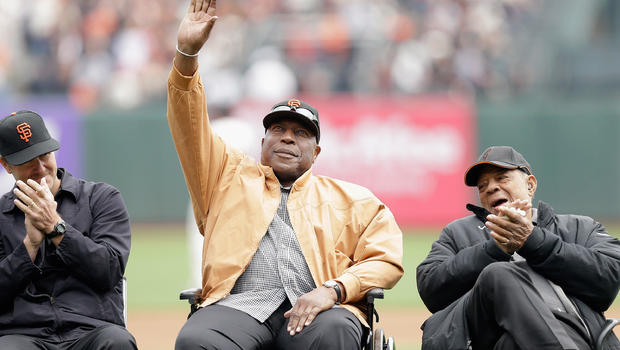