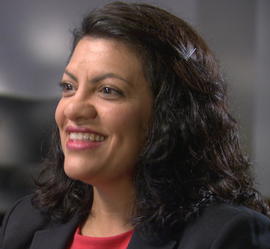 CBS News November 1, 2018, 8:10 AM Meet Rashida Tlaib, the Michigan Democrat poised to be one of the first Muslim women in Congress

Women are poised to make a big difference in next week's midterm elections both at the polls and on the ballot. Voters could send one of the first Muslim women to Congress with the election of Democrat Rashida Tlaib who is running in Michigan's 13th district House race. Tlaib is now facing a last minute write-in challenge from the woman she defeated in August, but the momentum is still with her campaign.

The attorney and former state legislator is the daughter of Palestinian immigrants and the eldest of 14. She told CBS News' Reena Ninan she's looking to change history at a time most people think it just isn't possible.

"The first thing I think about when somebody says you're going to be the first Muslim is celebrate this moment. We changed the course of history at a time we thought it was impossible. And that if you just believe, believe in the possibility of someone like me," Tlaib said.
While many have focused on her faith, Tlaib feels this moment is about so much more than that.

"For this to happen now, at a moment where we really have felt this moment of darkness. At a moment where Islamophobia is such a high rate…. like you don't have to read the Quran to love me…love the actions, love the things that I do. Look at those and that will help people get beyond whatever fear or stereotypical thing that they might be thinking about," she said.

If she wins next week, she will be one of the first Muslim women in Congress. She says it still hasn't hit her yet.

"I think people don't realize just how much of a rollercoaster it is and its happy chaos right now," she said.

Tlaib joins the hundreds of women running for office this year and like many of these candidates, she is also a mom. She was born in the mid-70s in Detroit to Palestinian immigrant parents. Her mom, Fatima, says she always believed her daughter would live the American dream.

"I am the girl from southwest Detroit that didn't speak English when I started school…. I was my mother's translator until I was probably 12 years old and I remember how people looked at her," Tlaib said. "I remember the different things that were happening to my family as we were getting situated and buying our first home in southwest Detroit, watching my mother learn how to drive for the first time. All of those experiences come with me."
The cause closest to her heart – the cause that brings her to tears – is immigration reform.

"I went to a predominantly African-American school. I didn't even understand our immigration system. I knew my parents immigrated here. I think growing up in a community where your neighbors are impacted directly, it's hard. And talking about walls and separation and detaining children. I think the immigration system, we have dehumanized it," Tlaib said.

Asked if she feels the Democratic Party is changing, she said, "I think everybody transforms right, organically. I think it is a new time…It's a new era of the Civil Rights movement. And it's time for a change."

Tlaib won Michigan's 13th district primary, which is roughly 60 percent African American, and says that she's all about issues. She's hoping to secure a $15 minimum wage, plans to push for equal pay, healthcare for all, and, of course, is hoping to overturn the travel ban. 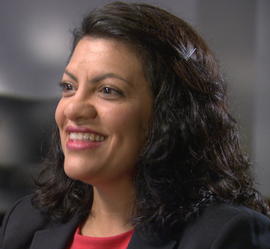