Google engineers and other workers walked off the job Thursday morning to protest the internet company's lenient treatment of executives accused of sexual misconduct.

It is the latest expression of a backlash against men's exploitation of female subordinates in a business, entertainment and politics. In Silicon Valley, women also are becoming fed up with the male-dominated composition of the technology industry's workforce — a glaring imbalance that critics say fosters unsavory behavior akin to a college fraternity house.

Walkouts are occurring at Google offices around the world, including Dublin and Singapore, social media reports said. In New York City, "thousands" joined the walkout, according to a Twitter account under the name of the Google protest, Google Walkout for Real Change.

According to Google Walkout for Real Change, the protesters' goals include several policy changes at the tech firm, including "a publicly disclosed sexual harassment transparency report" and "a commitment to end pay and opportunity inequity."

The protest is unfolding a week after a New York Times story detailed allegations of sexual misconduct about creator of its Android software, Andy Rubin. The report said Rubin received a $90 million severance package in 2014 even though Google concluded the sexual misconduct allegations against him were credible.

Rubin derided the Times story article as inaccurate and denied the allegations in a tweet.

The same story also disclosed allegations of sexual misconduct of other executives, including Richard DeVaul, a director at the same Google-affiliated lab that created far-flung projects such as self-driving cars and internet-beaming balloons. DeVaul had remained at the "X'' lab after allegations of sexual misconduct surfaced about him a few years ago, but he resigned Tuesday without severance, Google confirmed Wednesday.

Google CEO Sundar Pichai apologized for the company's "past actions" in an email sent to employees Tuesday. "I understand the anger and disappointment that many of you feel," Pichai wrote. "I feel it as well, and I am fully committed to making progress on an issue that has persisted for far too long in our society. and, yes, here at Google, too."

Pichai also said an earlier apology for its handling of sexual harassment claims didn't go far enough, and that the company will take a "harder line." He expressed support for the workers who plan to walk off the job in protest.

The email didn't mention the reported incidents involving Rubin, DeVaul or anyone else, but Pichai didn't dispute anything in the Times story.

In an email last week, Pichai and Eileen Naughton, Google's executive in charge of personnel issues, sought to reassure workers that the company had cracked down on sexual misconduct since Rubin's departure four years ago.

Among other things, Pichai and Naughton disclosed that Google had fired 48 employees, including 13 senior managers, for "sexual harassment" in recent years without giving any of them severance packages.

But Thursday's workout could signal that a significant number of the 94,000 employees working for Google and its corporate parent Alphabet Inc. remained unconvinced the company is doing enough to adhere to Alphabet's own edict urging all employees to "do the right thing."

A Silicon Valley congresswoman tweeted her support of the Google walkout using the "metoo" hashtag that has become a battle cry for women fighting sexual misconduct. "Why do they think it's OK to reward perpetrators & further violate victims?" asked Rep. Jackie Speier, who represents an affluent district where many of Google's employees live. 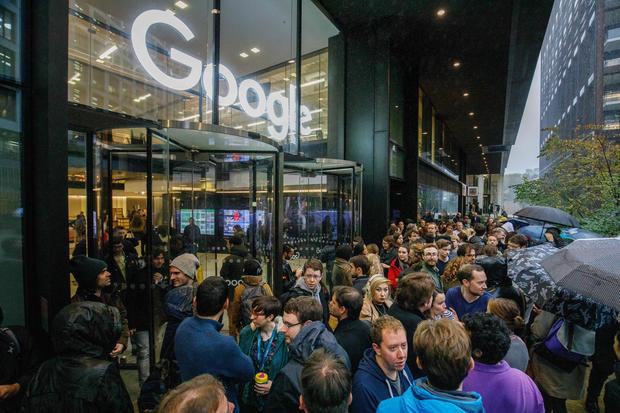 200,000 people applied for jobs at Amazon in a single week