K-pop sensation BTS is having a great year, especially frontman RM. RM, the boy band's main rapper, has become the first solo member of BTS to reach No. 1 on Billboard's Emerging Artists chart.

RM's latest solo album "mono." hit No. 2 on World Albums, and he became the highest-charting Korean solo artist when "mono." snagged No. 26 on the Billboard 200. Moreover, six of his songs have charted on the World Digital Song Sales; his most popular hit is "Seoul," which sits at No. 5. "mono." was released last week and is RM's sophomore solo album.

BTS recently dropped a new single with Steve Aoki, and in August, Nicki Minaj joined forces with the band for a new version of their track "Idol." BTS dropped their latest album, "Love Yourself: Answer" that month, as part of their "Love Yourself" trilogy. The new album has 25 tracks and is the final installment of the trilogy, after "Love Yourself: Her" and "Love Yourself: Tear."

In September, the septet addressed the U.N. General Assembly and performed at a related event called "Generation Unlimited."

BTS is iconic to a generation of young people around the world and their last album was the first-ever album by a Korean artist to reach the top place on the Billboard 200 list. In 2017, they made their American TV debut at the American Music Awards.

In August, BTS surpassed Taylor Swift for the most-viewed video within 24 hours on YouTube. 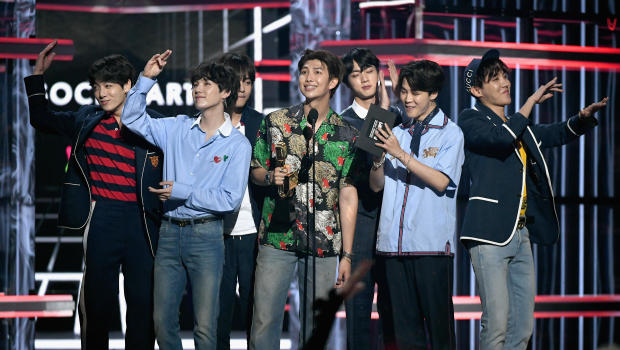