MIDDLETOWN, Connecticut — A campaign flier sent out by a Republican state Senate challenger is being harshly criticized by Democrats and others as anti-Semitic, CBS Hartford affiliate WFSB-TV reports. Ed Charamut adamantly denies it.

But on Charmut's Facebook page, many people are asking him to apologize and drop out of the race.

The mailer was aimed at Democratic state Rep. Matthew Lesser.

It shows a drawing of Lesser, who is Jewish, with a gleeful look in his eye as he holds cash in his hands.

The dispute comes as the Squirrel Hill section of Pittsburgh mourns the slaying of 11 congregants in a synagogue Saturday and amid a controversy over the role fiery language used by President Trump may be having in stoking violence.

"I had heard about it didn't believe that it could possibly be true and then I saw the flyer and I thought, to be honest, never in a million years did I expect to see something like that. Not in Connecticut," said Lesser.

The Anti-Defamation League (ADL) blasted it, saying in a statement Tuesday, "As a nonpartisan, nonprofit organization, the ADL does not speak out in favor of or against a candidate for elective office. The juxtaposition of a Jewish candidate and money in this manner suggests an age old anti-Semitic trope. We call on the campaign to clarify its position and intent in disseminating this image."

Quinnipiac Philosophy Professor Anat Biletzki, who is Jewish, feels the image is harmful. "You are mudslinging because you are putting down a certain group and saying they're bad guys. That's very dangerous," she said.

Charamut and Lesser are running for the State Senate in the 9th District, covering Middletown, Wethersfield, Newington, Cromwell and Rocky Hill.

He says in a statement, "Those wishing to portray a graphic illustration as hateful are completely wrong. I reject hate speech in all its forms. The mailer draws a stark contrast between myself and Matt Lesser. Do you want to protect your wallets, or do you want to make Matt Lesser your new state Senator?"

But even the chairman of the Connnecticut Republican Party, J.R. Romano, feels the ad was inappropriate.

In a statement, Romano said, "Several things have come into perspective from conversations with Jewish friends, including Jewish Republicans. In a race with a Jewish candidate, this image should be recognized as offensive, raising classic anti-Semitic tropes. It cannot be justified. I personally would not have approved this mailer, and I am grateful that the party did not approve it. I have requested to sit down with the ADL to broaden my understanding of and sensitivity to anti-Semitism."

Democratic gubernatorial candidate Ned Lamont issued a statement saying, "Hateful rhetoric from the White House has emboldened racists, homophobes, and anti-Semites to drop their dog whistles and express their bigotry clearly and openly. Those hateful words lead to violent acts. There aren't 'two sides' to anti-Semitism, and there aren't good people on 'both sides' of bigotry. Today, we're seeing overt anti-Semitism in Connecticut. I reject it in every way. And I call on (his Republican rival for the statehouse) Bob Stefanowski … and the entire GOP ticket, to speak out, reject the hateful rhetoric willfully stoked by President Trump, and condemn this kind of campaigning in Connecticut. We each have a moral obligation to stand up against hate whenever and wherever we see it. We must always stand up for Connecticut values. 'If not now, when?"' 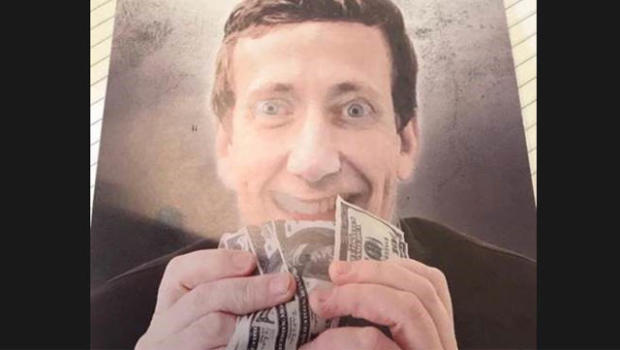 What people were searching for on Google in the lead up...