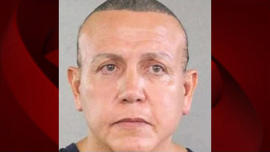 MIAMI — A letter sent by attorneys with the Department of Justice to the federal judge handling Cesar Sayoc's case says a search of his laptop reveals that he likely began planning his crimes in July due to the creation date of a file called "Debbie W.docx," CBS Miami reports.

The letter also reveals that on September 18, Sayoc — the suspect in a string of package bombs — searched the internet for "vice-president-joe-bidens-house- former/view," and that he also searched for his victims and their families.

Some of the searches listed are:

Sayoc is accused of targeting more than a dozen prominent Democrats and critics of President Trump this month with package bombs. Soros, Clinton, Clapper, Holder, Brennan, Debbie Wasserman Schultz and former President Obama were among those targeted through the devices, which according to authorities didn't have trigger mechanisms.

Federal prosecutors say Sayoc's cellphone contained photos of some of his victims, along with photos that "purport to be the home of former President Obama, the home of former Vice President Biden, and a driver's license belonging to former First Lady Michelle Obama that includes another address."

Sayoc was arrested Friday and charged with five federal crimes. He made his first court appearance on Monday in Miami.

Prosecutors wrote in the letter sent to the judge handling Sayoc's case that "the evidence of the defendant's terror campaign is still being collected but is already overwhelming."

"Because of the powerful proof that the defendant perpetrated these acts, he poses a substantial danger to the community," they wrote. "In light of the consequences at issue and the likelihood of conviction, the defendant is also a substantial flight risk. Therefore, pretrial detention is appropriate."

Despite his past criminal records, the letter says Sayoc "was repeatedly sentenced to terms of probation and he appears to have violated the terms of his probation at least twice since 2015."

As for why Sayoc needs to be jailed prior to his trial, prosecutors wrote, "previous lenient sentences were insufficient to deter the defendant, and he has never faced the type of sentencing consequences at issue in this case, which creates still greater incentives for him to flee."

A hearing on Sayoc's bond will be held Friday morning at 10 a.m. in Miami. 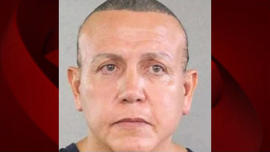