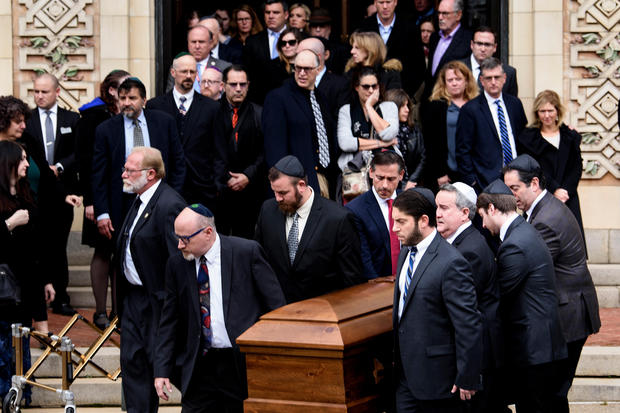 PITTSBURGH — Pittsburgh's Jewish community began burying its dead Tuesday, holding the first in a weeklong series of funerals for the 11 people who were gunned down in a synagogue Saturday. It was the bloodiest anti-Semitic attack in U.S. history.

More than 1,000 people poured into one of Pittsburgh's largest synagogues to mourn two intellectually disabled brothers who were killed. Cecil and David Rosenthal were "beautiful souls" who had "not an ounce of hate in them — something we're terribly missing today," Rabbi Jeffrey Myers, a survivor of the massacre, said at the brothers' funeral.

Myers, his voice quivering, said it was difficult for him to find the words to comfort mourners. But he told the Rosenthals' parents and other family members: "The entire world is sharing its grief with you, so you don't walk alone."

The Rosenthals' sister, Diane Hirt, said she never imagined burying one sibling, much less two, and under such tragic circumstances. Though her brothers were in middle age, they were widely known as "the boys."

She said Cecil — a gregarious man with a booming voice — would have especially enjoyed the media attention this week, a thought that brought laughter from the congregation.

With the Tree of Life synagogue still cordoned off as a crime scene, the funerals were being held at nearby synagogues and other Jewish sites.

The casket of Dr. Jerry Rabinowitz, a family physician known for his caring and kindness, was brought to the Jewish Community Center in the city's Squirrel Hill neighborhood for the day's first funeral. Two police vehicles were posted at a side door and two at the main entrance.

A line stretched around the block as mourners — some in white medical coats, some wearing yarmulkes, black hats or head scarves — passed beneath the blue Romanesque arches into the brick building, an American flag nearby fluttering at half-staff.

"A lot of people are feeling really angry about this. A lot of rage built up inside about this, because of it being a hate crime. Don't get me wrong; I do. But I'm so overwhelmed with sadness right now that I can't even be angry right now," said Robin Faulkner, whose family had seen Rabinowitz for 30 years and counted him as a dear friend. "It's just such a loss. Just tragic."

Less than two miles away, hundreds of mourners dressed mostly in black converged on the city's oldest and largest synagogue, Rodef Shalom, for the brothers' funeral. Among the mourners was Kate Lederman. She grew up in the Tree of Life synagogue and celebrated all of her milestones there. She recently gave birth.

"I was named there, bat mitzvahed there, married there. And my whole life was in that synagogue. Same with my father. And we knew Cecil and David. We knew all of them. This should be a week of pure joy having a baby, but it's a week of terror," she said. "We were supposed to have our baby naming there, but we're going to do it at home."

Also paying his respects was Dr. Abe Friedman, who typically sat in the back row of Tree of Life with the Rosenthal brothers but was late to the service on Saturday and was not there when the gunman opened fire. As he stood in line at the funeral with his wife, he wondered why he had been spared.

"Why did things fall into place for me?" he asked. "I usually sit in the back row. In the last row, everyone got killed."

A funeral was also set Tuesday for Daniel Stein, a man seen as part of the core of his congregation.

The other victims' funerals have been scheduled through Friday in a week of mourning, anguish and questions about the rampage that authorities say was carried out by a gunman who raged against Jews.

U.S. Attorney Scott Brady said federal prosecutors are seeking approval to pursue the death penalty against the suspect, Robert Bowers, who was injured during the shootout with police. Bowers made a brief court appearance in a wheelchair Monday and is being held without bail for a Thursday court appearance. The 46-year-old said little except "yes" when the judge asked if he understood the charges against him, including federal hate crimes.

President Donald Trump, meanwhile, planned to visit Pittsburgh Tuesday to offer his condolences, despite objections from some community members. There have been complaints in some quarters that his presence would take the focus off the dead and would be unseemly. Some have accused Mr. Trump of fomenting racial and ethnic hostility and have said he deserves some of the blame for the bloodshed.

"The last thing I want to see is — while these families are burying those that they lost — that there are protests and streets being closed and other things that are taking away from the most important thing that we can do, which is honoring the dead," said Pittsburgh Mayor Bill Peduto.

The rabbi of the Tree of Life Congregation said the president is "always welcome." 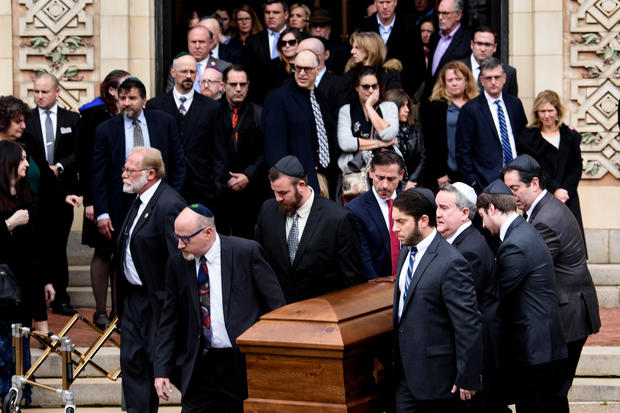