Ariana Grande took the stage for the first time since the death of her ex-boyfriend, Mac Miller, and breakup with ex-fiancé Pete Davidson. The pop star sang "The Wizard and I" for NBC's "Very Wicked Halloween" special, which aired on Monday on NBC.

Grande joined original "Wicked" cast members Idina Menzel and Kristin Chenoweth for a special concert to celebrate the 15th anniversary of the hit Broadway show. The "Dangerous Woman" singer wore a green bustier top and matching green lipstick as she performed. Other stars who took part in the special included Adam Lambert, Ledisi and Pentatonix.

"Wicked" was one of Broadway's biggest hits ever, taking less than 13 years to hit the $1 billion mark and remains the second top-grossing Broadway show, after "The Lion King," according to The Wrap.

Grande taped the performance just days after it was reported that she and fiancé Pete Davidson had split. In an Instagram Story, she admitted that she almost pulled out from the gig. She wrote on the day of the taping, "Can't believe I almost let my anxiety ruin this for me today!" But later, she wrote, "honored to be included in this celebration of 15 years of my favorite musical of all time 💚 wouldn't miss it for the whole universe #wicked15."

Grande's last performance was at Aretha Franklin's funeral at the end of August, during which she sang "Natural Woman." In mid-October, reports surfaced that Grande and Davidson split, which Davidson later confirmed. That weekend, the singer dropped out of a scheduled appearance at the F**k Cancer's inaugural Barbara Berlanti Heroes fundraising gala, hours before news broke of the split. Grande's manager, Scooter Braun, said, at the event, "Someone I'm very close to was supposed to come to sing for you today, and because of things she's going through, she couldn't be here today. And while I was frustrated, being the manager, my wife, being who she always is, just looked at me and she goes, 'She needs this time.'"

In September, Grande also dropped out of a scheduled appearance on "Saturday Night Live." Executive producer Lorne Michaels said it was because of "emotional reasons." At the time, Grande hinted she was having a tough time, tweeting, "can i pls have one okay day. just one. pls."

Grande's ex-boyfriend, rapper Mac Miller, was found dead on Sept. 7. Later, Grande said she was sorry she couldn't save the "sweetest soul" who for so long was her "dearest friend." 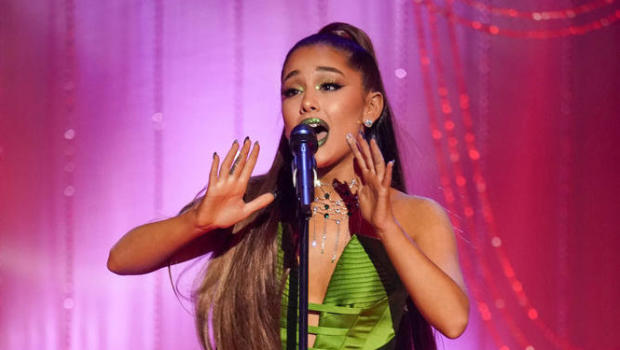 Senators to be sworn in for impeachment trial against former President...