"Simpsons" showrunner and executive producer Al Jean is responding to claims that controversial character Apu is leaving the show. A producer and YouTube personality, Adi Shankar, who is not affiliated with "The Simpsons," says sources have told him that writers for "The Simpsons" plan to write Apu out of the show.

On Friday, Shankar, who is a producer for Netflix's "Castlevania," told IndieWire that he heard from two people who work for "The Simpsons" and one person who works directly with creator Matt Groening that the show was going to phase out Apu "just to avoid the controversy."

In April, Shankar made an open call on social media for a script that "in a clever way subverts [Apu], pivots him, writes him out, or evolves him in a way that takes a creation that was the byproduct of a predominately Harvard-educated white male writers' room and transforms it into a fresh, funny and realistic portrayal of Indians in America." Now, he says he has "the perfect script" that he was hoping to pitch to "The Simpsons," and is disappointed that the show is reportedly sending off Apu quietly.

Jean responded on Twitter, saying, "Adi Shankar is not a producer on the Simpsons. I wish him the very best but he does not speak for our show." He did not address whether or not Apu will stay on the show. Shankar tweeted back to Jean and asked him to address the Apu issue head-on, saying, "I wish you well too. Let's work towards common ground. Ignoring only fans the flames. The world is polarized & getting more so, and the onus is on us to bring people together. Engage in a constructive way and this matter will go to bed. I see you, now I'm asking you to see me."

In April, the show indirectly responded to the controversy by making fun of political correctness. An episode showed Marge sharing her favorite childhood book with her daughter, Lisa. As she reads it, she realizes that the book contains offensive stereotypes about Irish- and Latin-Americans. Lisa responds, "Something that started decades ago and was applauded and inoffensive is now politically incorrect. What can you do?" A photo of Apu appears and Marge responds, "Some things will be dealt with at a later date," and Lisa says, "if at all."

Comedian Hari Kondabolu, who wrote the documentary "The Problem With Apu," which examined harmful stereotypes in pop culture, said it was a "jab … at what many of us consider progress."

Meanwhile, Hank Azaria, who voices Apu, said he would be willing to give up that role. In April, on the "Late Show," Azaria said he's "given this a lot of thought. Really a lot of thought. And … my eyes have been opened. And I think the most important thing is we have to listen to South Asian people, Indian people in this country, when they talk about what they feel and how they think about this character, and what their American experience of it has been."

The voice actor called on "The Simpsons" to use South Asian and Indian writers, and "not in a token way, but genuinely informing whatever new direction this character may take including how it is voiced or not voiced." He added that he hoped "The Simpsons" would take the Apu character in a different direction. He also said the idea that anyone is being bullied based on Apu "really makes me sad." 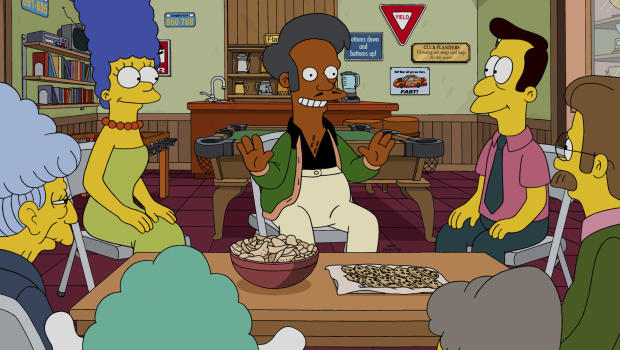