In the aftermath of the mass shooting at a Pittsburgh synagogue, Sen. Cory Booker of New Jersey declared on a weekend visit with New Hampshire Democrats that "we are in a moral moment in America." Booker told young Democratic activists gathered Sunday at the University of New Hampshire that what worries him in moments like these is that "we pause and express grief and then we move on as if this is normal."

Eleven congregants were killed in the recent Pittsburgh shooting, called one of the deadliest attacks against the Jewish community in this country.

The senator from New Jersey was one of several prominent Democrats, including former President Obama and Hillary Clinton, sent pipe bombs recently through the mail, authorities said. All of the explosive devices were intercepted and no one was injured.

"I was protected by vigilant first responders that stopped the package before it even came to New Jersey," Booker said at Sunday's get-out-the-vote event at the university. He was joined in Durham by Democratic gubernatorial nominee Molly Kelly, First Congressional District nominee Chris Pappas, as well as Sen. Jeanne Shaheen.

While he refrained from directly criticizing President Donald Trump, Booker appeared to indirectly target the president for his divisive rhetoric on Twitter and at his political rallies.

"In general we have to understand that words matter and that we all need to be mindful of what we're saying," Booker told reporters.

"Since 9/11 the majority of our terrorist attacks have been rightwing groups and the majority of those have been white supremacist groups, people that are peddling hate against blacks or Jews or other minorities. It's so antithetical to who we are," Booker said. "And a lot of them are using the rhetoric of the leaders in this country in their propaganda."

Booker's swing through New Hampshire — to help Democratic candidates running in the Nov. 6 election — was his first visit in more than two years to the state the traditionally holds the first primary in the race for the White House. And it comes after he made stops this month and in August in Iowa, South Carolina and Nevada, the other early voting states on the primary and caucus calendar.

The senator also organized a visit later Sunday to the state Democratic campaign office in Portsmouth and a rally with Rep. Ann Kuster at Dartmouth College in Hanover.

Those visits have helped intensify speculation that Booker is gearing up for a possible run for the 2020 Democratic presidential nomination. But Booker told the Associated Press that "I'm not even focusing on that" and will "start thinking about 2020″ after Nov. 6. 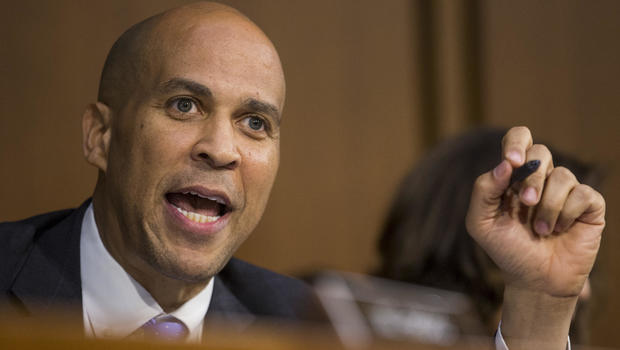