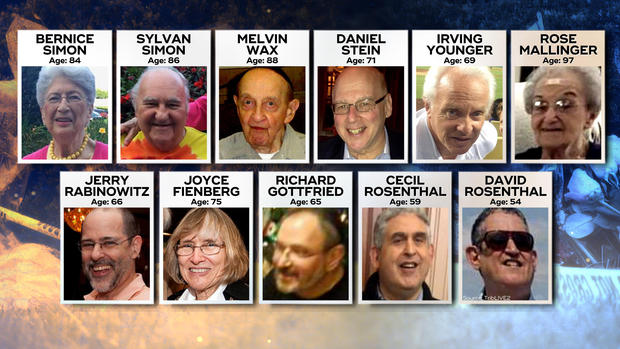 Authorities have released the names of the 11 people killed by a gunman during worship services in a Pittsburgh synagogue. The victims ranged in age from 54 to 97, and included brothers and a husband and wife.

Authorities said the suspected gunman, Robert Bowers, made statements about genocide and killing Jewish people. Bowers, who was armed with an AR-15 rifle and three handguns, told an officer "that he wanted all Jews to die and also that they (Jews) were committing genocide to his people," an affidavit said.

He was charged Saturday with 11 state counts of criminal homicide, six counts of aggravated assault and 13 counts of ethnic intimidation in what the leader of the Anti-Defamation League called the deadliest attack on Jews in U.S. history. Bowers was also charged Saturday in a 29-count federal criminal complaint that included the charge of obstructing the free exercise of religious beliefs — a federal hate crime. U.S. Attorney General Jeff Sessions said the charges "could lead to the death penalty."

Here's what we know about the victims:

David and Cecil Rosenthal went through life together with help from a disability-services organization. And an important part of the brothers' lives was the Tree of Life Congregation, where friends said they never missed Saturday services.

"If they were here, they would tell you that is where they were supposed to be," Chris Schopf, a vice president of Achieva, said in a statement. Achieva provides help with daily living, employment and other needs. The organization had worked for years with the brothers.

They lived semi-independently, and Cecil was a person who was up for all sorts of activities: a concert, lunch at the restaurant chain Eat 'n Park or a trip to the Duquesne University dining hall, said David DeFelice, a Duquesne senior who was paired with him in a buddies program.

The two left an impression on state Rep. David Frankel, who sometimes attends services at Tree of Life and whose chief of staff is the Rosenthals' sister.

"They were very sweet, gentle, caring men," Frankel said. "I know that this community will really mourn their loss because they were such special people."

Gottfried was preparing for a new chapter in his life. He ran a dental office with his wife and practice partner Margaret "Peg" Durachko Gottfried. The dentist, who often did charity work seeing patients who could not otherwise afford dental care, was preparing to retire in the next few months.

Dr. Rabinowitz and his partner in his medical practice were seemingly destined to spend their professional lives together. He and Dr. Kenneth Ciesielka had been friends for more than 30 years, since they lived on the same floor at the University of Pennsylvania.

Ciesielka was a few years behind Rabinowitz, but whether by fate or design, the two always ended up together. They went to the same college, the same medical school and even had the same residency at University of Pittsburgh Medical Center (UPMC) a few years apart.

Rabinowitz, a family practitioner at UPMC Shadyside, was remembered by UPMC as one of its "kindest physicians." The hospital said in a statement that "the UPMC family, in particular UPMC Shadyside, cannot even begin to express the sadness and grief we feel over the loss."

"Those of us who worked with him respected and admired his devotion to his work and faith. His loss is devastating," Tami Minnier, UPMC chief quality officer, wrote in a statement on Twitter.

Jonathan Voye told the Pittsburgh Post-Gazette that Younger was personable and occasionally spoke with him about family or the weather. "I'm scared for my kids' future," Mr. Voye told the Post-Gazette. "How can you have that much hate for your fellow neighbor?"

Tina Prizner told the Tribune-Review she's lived next door to Younger for several years. Prizner said he was a "wonderful" father and grandfather.

The one-time real estate company owner "talked about his daughter and his grandson, always, and he never had an unkind word to say about anybody," Prizner told the Tribune-Review.

Stein was a visible member of Pittsburgh's Jewish community, where he was a leader in the New Light Congregation and his wife, Sharyn, is the membership vice president of the area's Hadassah chapter. He had recently become a grandfather.

"Their Judaism is very important to them, and to him," said chapter co-president Nancy Shuman. "Both of them were very passionate about the community and Israel."

The 71-year-old was president of the Men's Club at Tree of Life. He also was among a group of New Light members who, along with Wax and Richard Gottfried, 65, made up "the religious heart" of the congregation, Cohen, the congregation co-president, said.

Stein's nephew Steven Halle told the Tribune-Review that his uncle "was always willing to help anybody." With his generous spirit and dry sense of humor, "he was somebody that everybody liked," Halle said.

Fienberg and her late husband, Stephen, were intellectual power houses. Those who knew them say they were the kind of people who used that intellect to help others.

The 75-year-old spent most of her career at the University of Pittsburgh's Learning Research and Development Center, retiring in 2008 from her job as a researcher looking at learning in the classroom and in museums. She worked on several projects, including studying the practices of highly effective teachers.

Dr. Gaea Leinhardt, who was Fienberg's research partner for decades, said she is devastated by the murder of her colleague and friend. "Joyce was a magnificent, generous, caring, and profoundly thoughtful human being," she said.

Stephen, who died in 2016 after a battle with cancer, was a renowned professor of statistics and social science at Carnegie Mellon University. His work was used in shaping national policies in forensic science, education and criminal justice.

The couple married in 1965 and had moved to Pittsburgh in the early 1980s. Joyce began her work at the center in 1983. The couple had two sons and several grandchildren.

Wax was the first to arrive at New Light Congregation in Pittsburgh's Squirrel Hill neighborhood — and the last to leave.

Myron Snider said Wax would stay late to tell jokes with him and said his friend was unfailingly generous. "When my daughters were younger, they would go to him, and he would help them with their federal income tax every year. Never charged them."

New Light moved to the Tree of Life building about a year ago, when the congregation of about 100 mostly older members could no longer afford its own space, said administrative assistant Marilyn Honigsberg. She said Wax, who lost his wife Sandra in 2016, was always there when services began at 9:45 a.m.

Snider said Wax was a pillar of the congregation, filling just about every role except cantor. Snider had just been released from a six-week hospital stay for pneumonia and was not at Saturday's services. "He called my wife to get my phone number in the hospital so he could talk to me," Snider said. "Just a sweet, sweet guy."

The Simons were a married couple who were retired and liked to take walks around the neighborhood.

Rose Mallinger was the oldest victim in Saturday's shooting. Worshipers remember her as almost the first to always walk into services and was described by a relative as "the most caring gentle loving woman."

Her daughter was among those wounded in the shooting. 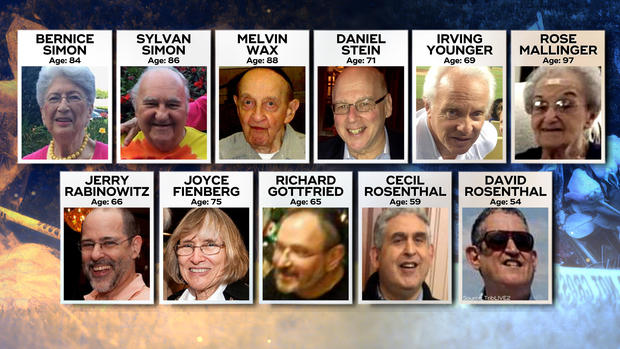 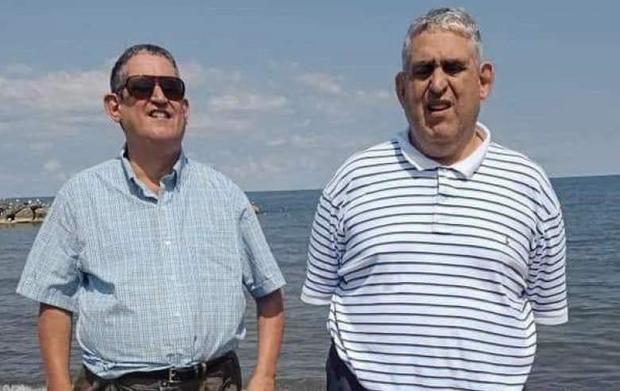 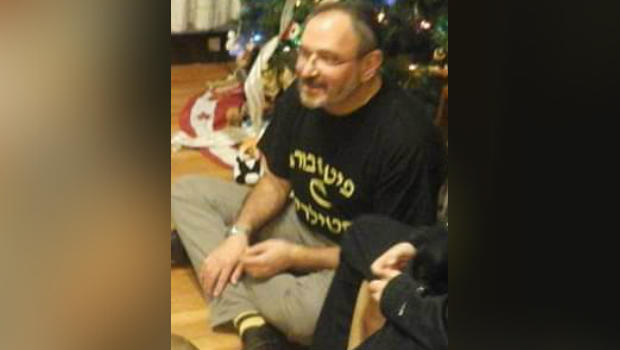 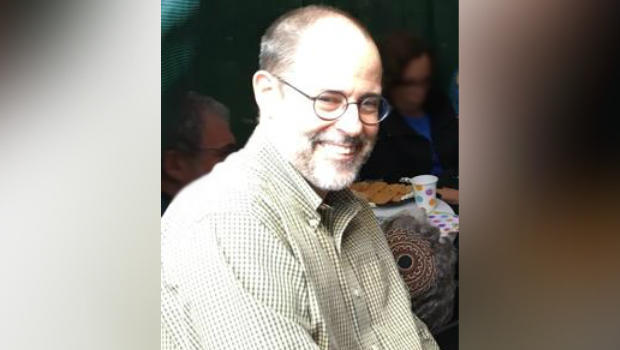 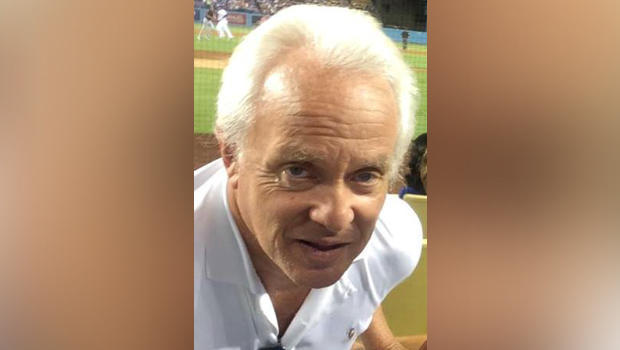 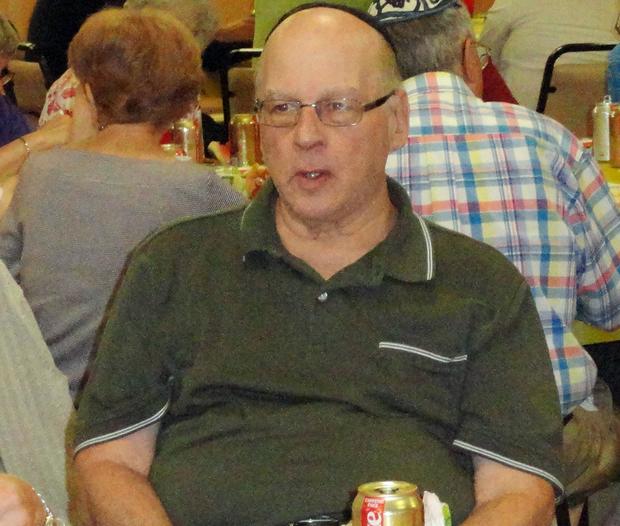 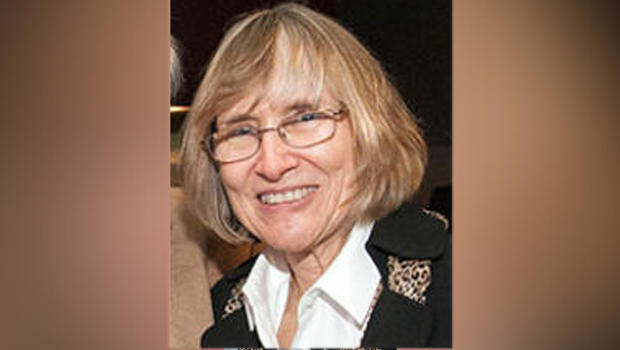 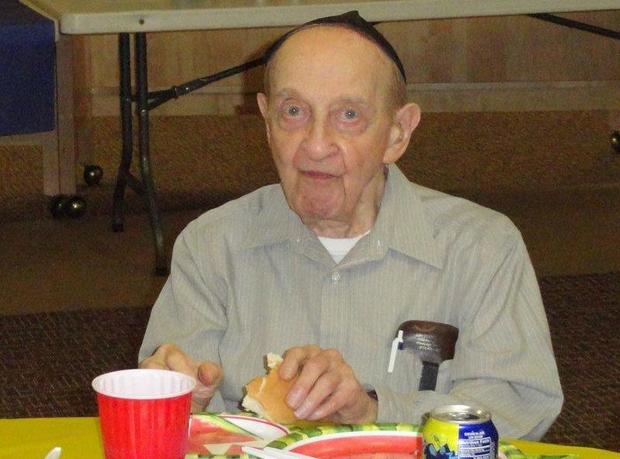 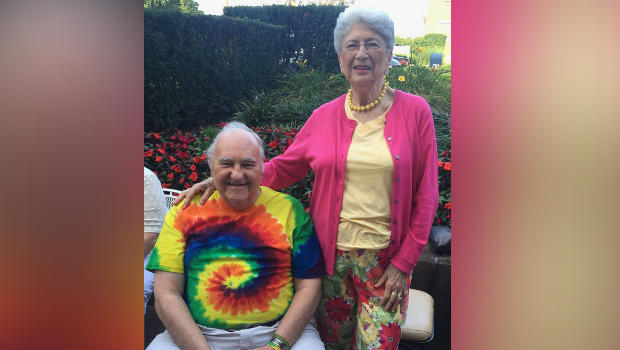 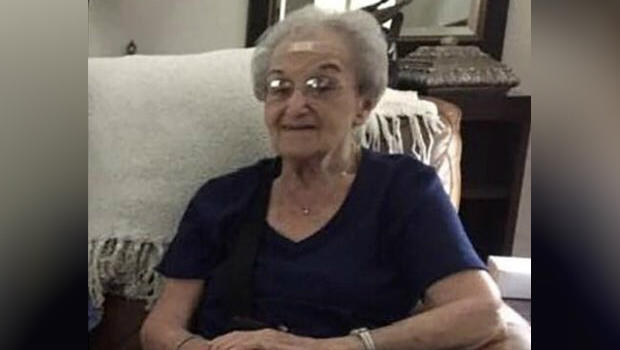 Man accused of decapitating mom found not guilty by insanity