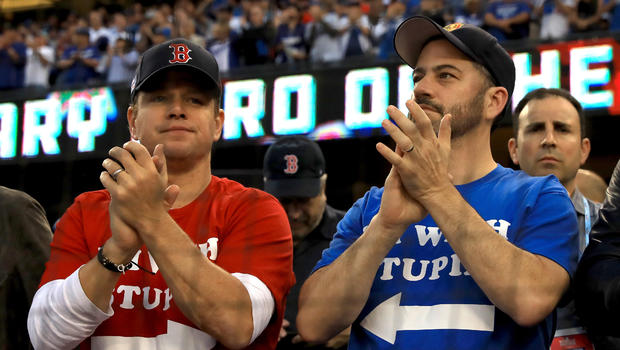 Dodgers fan Jimmy Kimmel and Red Sox fan Matt Damon continued their years-long comic feud at Game 5 of the World Series Sunday night. The "frenemies" sat next to each other wearing "I'm with stupid," t-shirts in their team colors. Of course, Kimmel's t-shirt pointed at rival Damon and Damon's pointed back at Kimmel.

The late-night host and actor have been embroiled in the feud for years, which began when "Jimmy Kimmel Live" ran out of time and the host had to cut his final guest, which was Damon. It first happened 12 years ago, Time reports, and ever since, Kimmel has consistently joked that Damon was supposed to appear, but they ran out of time and had to bump the actor from the show.

The joke continued to evolve and in 2008, Damon appeared in a sketch with Kimmel's then-girlfriend Sarah Silverman, taunting Kimmel that they were secretly involved behind his back. Kimmel responded by filming a sketch with Damon's best friend, Ben Affleck, pretending to be in a relationship with him.

Affleck was also at the final World Series game on Sunday and sat next to the "stupid" friends. Both Affleck and Damon grew up in the Boston area and are huge Red Sox fans.

The acting buddies famously got their break writing and starring in "Good Will Hunting," which was set in Boston. The Boston boys were excited over their team's championship win.

Kimmel is originally from New York but now lives in L.A. and wore blue to represent the Dodgers at Game 5. The host let his two pals revel in their team's championship win while he stood nearby looking less-enthused. 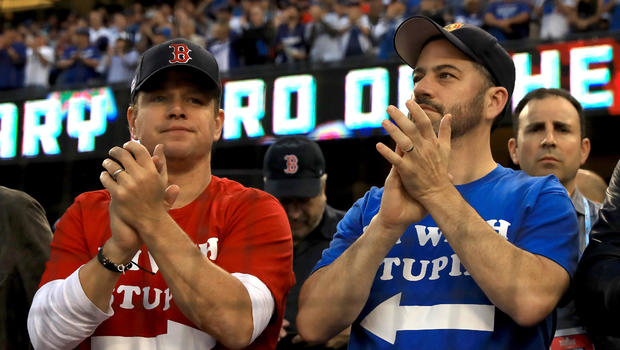 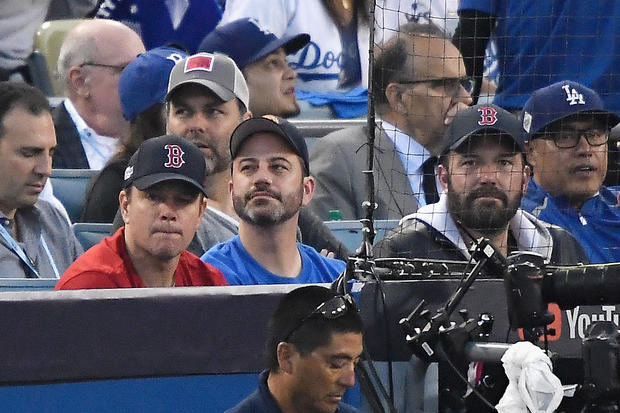